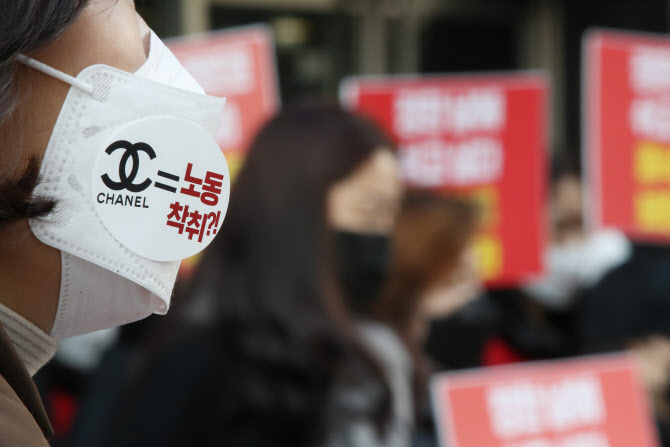 Employees of Chanel Korea hold a press conference in Seoul on Dec. 7, 2021, threatening to go on a strike indefinitely over the company’s alleged violation of labor regulations. (Yonhap)

SEOUL, April 8 (Korea Bizwire) — The Korean branch of the Organization for Economic Cooperation and Development (OECD) on Friday said it has decided to begin mediation procedures between Chanel Korea’s labor union and management over the company’s alleged violation of labor acts and human rights.

In December last year, employees of the French luxury brand’s counters at department stores and duty-free shops filed a complaint with the OECD’s Korean National Contact Point (KNCP) against the company, claiming it did not pay proper wages while forcing them to work during holidays and changed employees’ work schedules without prior consultations.

The labor union also accused the company of poor responses to sexual harassment cases among the workers, as well as its failure to implement agreed-upon anti-COVID-19 working regulations.

After deliberation and due procedures, the Korean office decided to initiate an arbitration process by forming a committee on the premise that the labor union and the management voluntarily take part in the process.

The mediation is supposed to be wrapped up before Dec. 10, 2022, or within one year of the complaint being accepted.

The company has countered that it has been handling the sex crimes in accordance with related law, and holiday work was properly compensated according to labor acts.

It also claimed it has provided workers with proper working guidelines and necessary information under the pandemic situation.

“We’ve reviewed statements from both sides and various other materials, and decided to begin the mediation. We see the need to contribute to resolving the issue by arranging dialogue between the parties,” the Korean office said in a release.

If the two sides fail to reach an agreement, the KNCP will close the case after issuing a final statement that carries claims of both sides and its recommendations.

Established in 2001, the KNCP is meant to promote the OECD Guidelines for Multinational Enterprises, voluntary and non-binding recommendations aimed at minimizing adverse impacts from activities of multinational firms and strengthening responsible business.

A total of 50 nations, including 38 OECD member nations, now operate NCPs of their own, the ministry said.

In December, Chanel Korea’s labor union went on a strike, demanding holiday pay and improvements in their working environments.

After rounds of negotiations, the two sides reached an agreement on a pay raise and other issues, but the labor union decided not to withdraw the complaint with the OECD office.

Around 480 people are working at Chanel cosmetics counters at department stores and duty-free shops, and about 390 are union members.