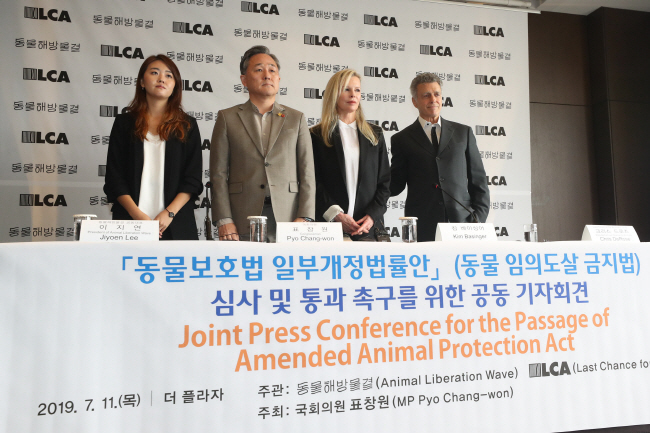 SEOUL, Jul. 12 (Korea Bizwire) — An animal rights advocacy group is calling on the deliberation and enactment of a bill that bans the arbitrary slaughtering of animals.

The Animal Liberation Wave (ALW) and Rep. Pyo Chang-won of the ruling Democratic Party held a press conference in Seoul on Thursday, calling for legislation “to ban all forms of arbitrary slaughtering of animals except in situations provided by the law.”

Kim Basinger, a Hollywood actress and animal rights advocate, were also present at the scene.

According to the new bill, animal slaughtering would only be allowed in exceptional cases, and should be carried out in a manner that inflicts the least amount of pain.

If the bill is passed, dogs will be banned from any form of slaughter since they are not “livestock” as defined under the livestock sanitation management act, which would lead to the de facto prohibition of all production or consumption of dog meat.

“For now, nobody is getting punished for slaughtering pets and using them for food,” said Lee Ji-yeon, co-president of the ALW.

“Legislation for animal protection is meaningless if it cannot effectively ban arbitrary slaughtering of animals.”

The group staged a protest in front of the National Assembly on Friday calling for an expedited review of the proposed bill.