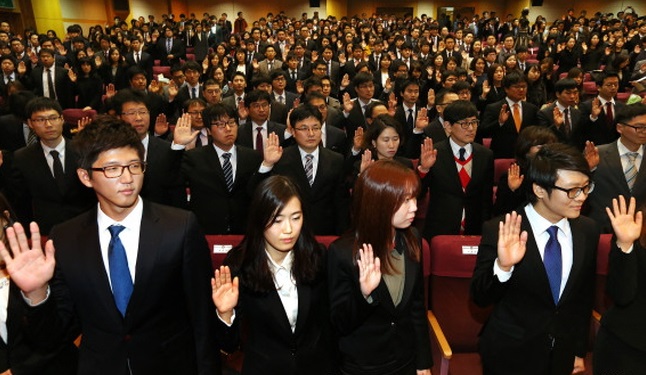 In January 2020, only 65 judicial apprentices will be admitted to the bar. Only one will enter the institution this March. (image: Yonhap)

More than half of the 117 graduates of the institute have yet to decide their career. These pre-judicial officers can choose between lawyer, prosecutor, court trial researcher, and public sector worker.

Only 43 percent of the graduates have chosen their career.

As the overall number of people employed by public institutions decreases due to the economic downturn, graduates will have to wait several months to get a job even after completing their studies.

Meanwhile, with the introduction of law schools, the number of students passing the bar exam is decreasing.

In January 2020, only 65 judicial apprentices will be admitted to the bar. Only one will enter the institution this March.

During the ceremony, Supreme Court Chief Justice Kim Myeong-su stressed the importance of judicial officials being service workers for the public interest.

The reason for the government investing a considerable amount of money to train judicial apprentices is for the public.

Lawyers can only earn respect from the public when they are traditionally engaged in activities with a strong sense of service for the public interest.