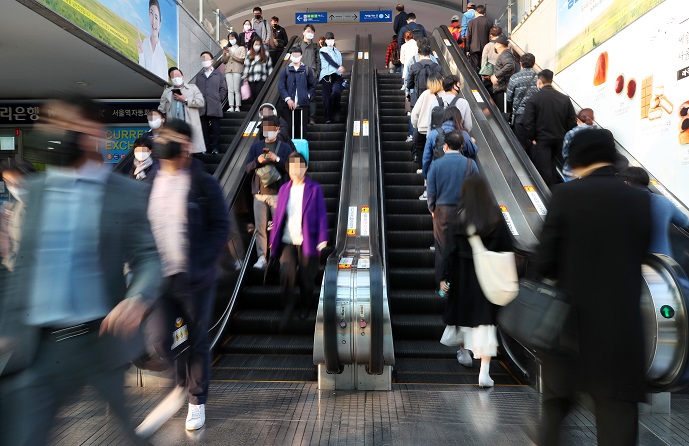 Seoul Station is busy with travelers in the morning on Nov. 1, 2021, the first day South Korea’s “living with COVID-19″ scheme went into effect. (Yonhap)

SEOUL, Nov. 1 (Korea Bizwire) – City centers in Seoul welcomed back the return of rush hour crowds Monday morning as office workers and students resumed their in-person lives under the government’s “living with COVID-19″ scheme aimed at bringing the nation gradually back to pre-pandemic normalcy.

South Korea activated on Monday the first of the three-stage scheme to gradually phase out coronavirus restrictions as more than 70 percent of the population have been fully vaccinated.

Under the latest measure effective for four weeks, operation hour curfews on cafes, restaurants and other businesses were fully lifted, except for nightlife establishments, while the private gathering limit was raised to 10 people for the greater Seoul area.

Working from home, recommended for 30 percent of the workforce at companies outside the manufacturing sector under the previous Level 4 social distancing in the greater Seoul area, is no longer advised, while schools will be allowed to fully open their doors to students on Nov. 22, following a state-run university entrance exam the previous week.

Major public transportation services in the capital were inundated with commuters and students returning to workplaces and schools, respectively, beginning early in the morning.

“It is both awkward and exciting to go to the office to work for the first time,” said a 29-year-old office worker surnamed Kim, who had worked from home since landing the current job in Seoul in June.

“I feel I am a real office worker now that I can work and communicate alongside my co-workers.”

A Twitter user with the account “@vari********” uploaded a photo indicating more than 80 morning coffee grabbers were waiting in line at a Starbucks store in the morning. “It seems everyone has come back from working from home,” the Twitter user commented.

Others remain worried about a possible flare-up of infections due to the eased virus curbs.

Many office workers also complained about the hassle of having to again go through rush hour, as well as the apparent resumption of overtime company dinner meetings, a typical routine in the Korean corporate culture.

“I don’t understand at all why infectious disease prevention measures had to be eased at a time social distancing still remains a far cry on public transportation services during the rush hours,” Cho Seong-bin, a high school sophomore in Seoul, told Yonhap News Agency.

An office worker surnamed Park said he is worried, thinking about the resumption of the “inefficient” in-person office life.

“I have been very happy working from home, without having to be face to face with my boss every day and getting to spend time for my health and personal advancement,” said the office worker who commutes from Incheon, 40 kilometers west of Seoul, to the capital’s financial district of Yeouido.

A 48-year-old office worker, surnamed Chang, echoed the point. “I feel already tired when thinking of the resumption of a life without evening rest because of the busy corporate life, especially corporate dinner meetings.” 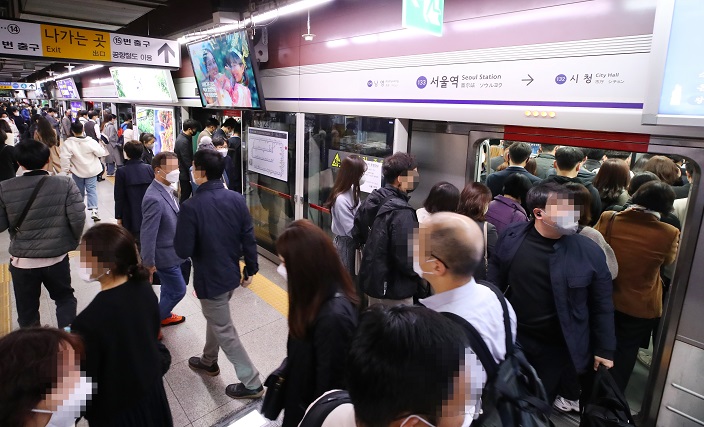 A subway stop for Seoul Station is busy with commuters in the morning on Nov. 1, 2021, the first day South Korea’s “living with COVID-19″ scheme went into effect. (Yonhap)

Both operators and customers of multi-use facilities that require a “vaccine pass” for admission under the eased social distancing, such as bathhouses or gyms, also complained of inconveniences as the vaccination requirement system has yet to take root.

A 62-year-old surnamed Yang was denied entry into a public bathhouse in the Seoul district of Mapo in the early afternoon because he did not have a certificate of vaccination or a negative test certificate, required to use multi-user facilities under the first phase of “living with COVID-19.”

“It’s preposterous to receive such a disadvantage on the everyday life level even after I had my antibodies produced … after being infected with and recovering from COVID-19,” Yang said, adding that he will file a complaint with the government.

Park Ki-tae, a manager at a public bathhouse in the area, said he is worried because many old customers who don’t carry mobile phones may have to be turned back because it’s difficult to prove their vaccination status without a mobile phone.

Through the second and third phase of “living with COVID-19,” expected to be effective in December and January, the country will eventually roll back all business curfews and gathering limits.

Health authorities have warned there could be sudden surges of daily virus cases during the process.

The normalization process will be temporarily put on hold and a contingency virus prevention plan will take over if the country’s COVID-19 caseload reaches a crisis level, the government said.