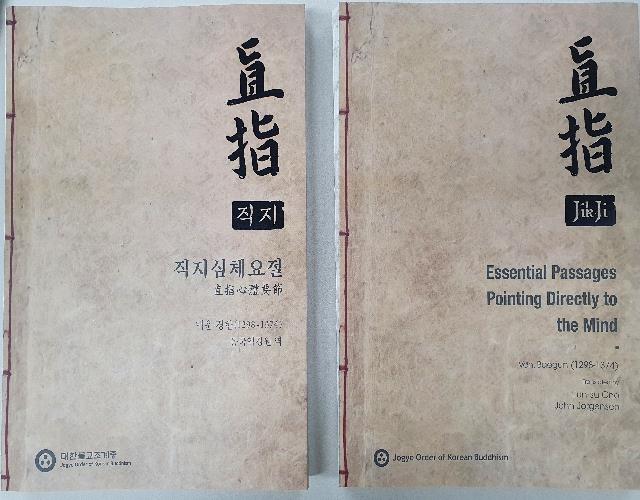 This photo provided by the Jogye Order shows Korean (L) and English translations of Jikji, an ancient Buddhist document.

Jikji, written in Chinese characters by Buddhist monk Baegun Gyeonghan, is the abbreviated title of a Buddhist document whose full title, “Jikji Simche Yojeol,” can be translated as “anthology of great Buddhist priests’ Zen teachings.”

It was printed in 1377 at the Heungdeok Temple in the central city of Cheongju during the Goryeo Dynasty (918-1392). That was 78 years prior to the printing of Gutenberg’s 42-line Bible in Europe.

The Jogye Order first published the Korean and English translations of Jikji in 2005, and the latest editions have been completed through reviewing and reediting throughout last year.

The Buddhist order said it will publish the French translation of Jikji this year and push ahead with other relevant projects to publicize the core of Zen Buddhism and Korea’s cultural capabilities associated with the world’s first metal printing technology.

UNESCO confirmed Jikji as the world’s oldest metal-printed book in 2001 and included it in the UNESCO Memory of the World registry that year. The ancient book is now kept at the National Library of France in Paris.