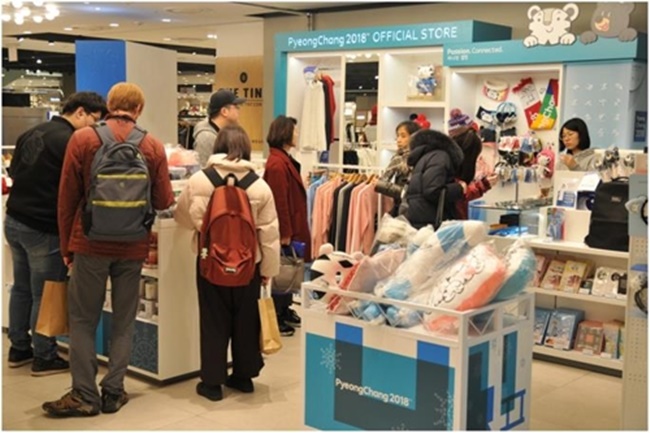 DAEGU, Feb. 21 (Korea Bizwire) – The popularity of Olympic merchandise is soaring in South Korea with the Winter Games set to wrap up this weekend.

According to the Daegu branch of Lotte Department Store on Tuesday, sales at the store’s Olympic boutique shot up around the Lunar New Year holiday.

Officials from Lotte Department Store say the shop dedicated to official PyeongChang Olympics goods and merchandise and located on the fifth floor of the Daegu branch saw sales jump nearly tenfold last Saturday, compared to before the opening ceremony.

Some observers suggest that impressive performance of South Korean athletes, who have earned four gold medals so far, has helped spark public interest in the Winter Olympics as well as official merchandise.

“Prior to the opening ceremony, the daily sales figure stood at around 1.5 million won. After the Lunar New Year holiday however, sales reached over 10 million won,” Lotte Department Store said.

Among the most popular items are plush toys of the PyeongChang 2018 Olympics mascot Soohorang.

The white tiger inspired by Korea’s guardian animal alongside Bandabi, the official mascot of the 2018 Winter Paralympics, have become among the most popular items at Lotte Department Store, with many of the toys already sold out.

Only a small stock of the premium model of Soohorang wearing a traditional Korean hanbok priced at 110,000 won are left at Lotte Department Store.

Adding to the popularity is the fact that many South Koreans are buying Olympics merchandise as gifts for high school students who are taking a university entrance exam this year.

Unfortunately, production hasn’t met demand, and manufacturers have admitted they did not expect this level of public interest in the Winter Olympics, with retailers apologizing to customers for not having secured enough stock.

In addition to plush toys, sales of fashion items such trainers, backpacks, scarves, hats, and badges have also increased.

“Though only a few select items were popular including padded jackets, sales of all items have increased since the Lunar New Year holiday,” a senior official at the Daegu branch of Lotte Department Store said.