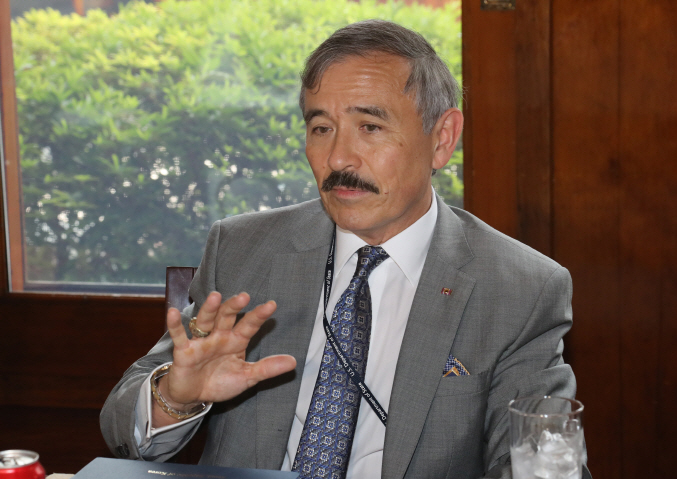 SEOUL, Sept. 7 (Korea Bizwire) – Students of Chonnam National University, located in Gwangju, rallied in front of their president’s office on Sept. 6 in disapproval of the visitor that day – U.S. Ambassador to South Korea Harry Harris.

About a dozen CNU students, including some members of the student council, gathered around the university’s main hall half an hour prior to the ambassador’s arrival, calling for the U.S. to apologize for the Gwangju Massacre.

The massacre, also known as the Gwangju Uprising, took place on May 18, 1980, when students and citizens of Gwangju rose against the military coup d’etat orchestrated by General Chun Doo-hwan.

Some citizens took up arms by robbing police stations, but were fired upon and brutally quelled by the martial law troops. Hundreds of citizens were killed, although the exact figure remains unknown.

The Gwangju people still tend to be allergic to America as they believe the U.S. either overlooked the brutal killings or even covertly supported the military regime. While the truth remains untold, the Carter administration did maintain diplomatic relations with the Chun regime.

When Harris arrived at the university at 3 p.m. that day, students swarmed into the building to raise their voices against the top American diplomat in the country.

While the police were fending off the vocal students, Harris met with CNU President Chung Byung-seok and left the school right away.  His plan to have a closed roundtable with a group of CNU students was aborted.

Earlier that day, Harris visited Gwangju Hanggyo, a 15th Century Confucian school, instead of the May 18th National Cemetery, which was on his itinerary originally. Civic groups were preparing to hold an anti-American rally at the cemetery.

“We planned to go in remembrance of the people who lost their lives to advance democracy in South Korea,” the U.S. Embassy commented, “But we decided to postpone our visit because we heard some citizens were against it.”

“It’s a sacred place and we wanted to avoid any possible confrontation.”

Ambassador Harris will head back to Seoul after attending the opening ceremony of 2018 Gwangju Biennale.