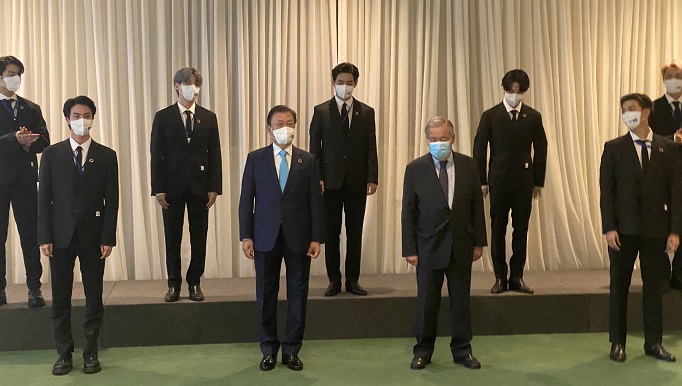 HONOLULU, Sept. 22 (Korea Bizwire) — South Korean President Moon Jae-in focused on two matters on what may be his final visit to the United States while in office: drumming up global support for Seoul’s diplomatic initiatives and expanding the COVID-19 vaccine partnership between the allies.

In the first official activity of his five-day trip to the U.S., Moon participated in the opening session of the second Sustainable Development Goals Moment (SDG Moment) event held at the U.N. headquarters in New York Monday, along with the members of BTS, a South Korean boy band appointed as Moon’s special envoy for “future generations and culture.”

The SDG Moment is designed to help galvanize the campaign to achieve the U.N.-led goals adopted in 2015.

Moon said in a brief speech, “With BTS, the first-ever special (presidential) envoy from the private sector, we hope that today’s gathering will be an opportunity to mobilize the goodwill and actions of the next generation for sustainable development.”

The president helped enhance the young generations’ awareness of pending global challenges by attending the event together with BTS and also encouraged the U.N.’s efforts for the hope of the youth and a better world, Cheong Wa Dae said in a statement.

Moon was then present at the 76th session of the U.N. General Assembly Tuesday, becoming the first South Korean president to take part in the annual event for the fifth consecutive year.

“This is meaningful as the demonstration of South Korea’s robust commitment to leading international cooperation and multilateralism,” Moon’s office said.

Moon was invited to the Group of Seven (G-7) summit held in Britain in June, and South Korea was reclassified in the following month as an advanced economy by the United Nations Conference on Trade and Development (UNCTAD), which reflects an assessment of pivotal role in South Korea’s international cooperation on the COVID-19 pandemic as a bridge between developed and developing nations, Cheong Wa Dae added.

In his latest U.N. speech, Moon described the recent situation in Afghanistan as a stark reminder of the crucial role that the U.N. plays in advancing peace and human rights.

“For the U.N.’s initiatives in conflict prevention and peacebuilding, Korea will increase its fair share of contribution,” he stated. 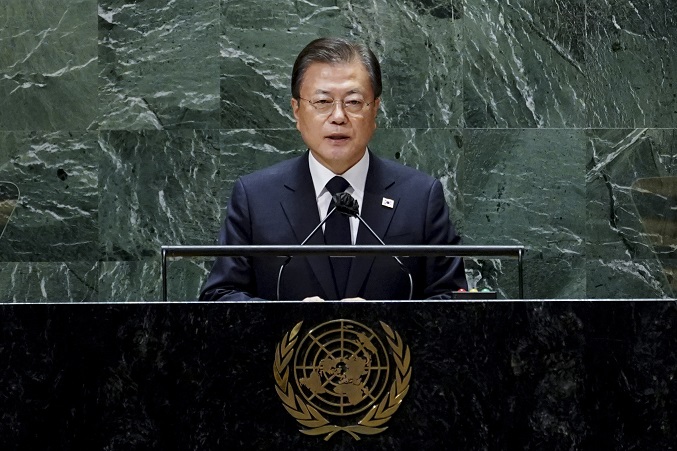 He noted that South Korea plans to host the U.N. Peacekeeping Ministerial Conference in December for the first time as an Asian nation.

Moon also demonstrated South Korea’s resolve to bring lasting peace to the peninsula, with the two Koreas commemorating the 30th anniversary of becoming U.N. members at the same time.

For the past four years, Moon’s U.N. speech served as a chance to deliver peace messages to North Korea and the world. This year was no exception.

Regarding North Korea, his message was clear. That was proclaiming a formal end to the 1950-53 Korean War is indeed necessary to create a “new order of reconciliation and cooperation” on the peninsula.

He had a series of bilateral summit talks as well with his British, Slovenian and Vietnamese counterparts on the sidelines of the U.N. session.

Establishing a vaccine swap deal was discussed in his talks with British Prime Minister Boris Johnson on Monday. The two sides said that related progress has been made.

A Cheong Wa Dae official told reporters that Britain is expected to deliver one million doses of mRNA vaccines to South Korea in stages starting this weekend.

During a summit with Vietnamese President on Tuesday, Moon unveiled a plan to provide the Southeast Asian nation with one million doses of vaccines by the end of October.

While Seoul has pledged to donate a total of US$200 million for the supply of vaccines to lower-income countries through the COVAX program, it would represent the first direct offer of vaccine for a foreign country. 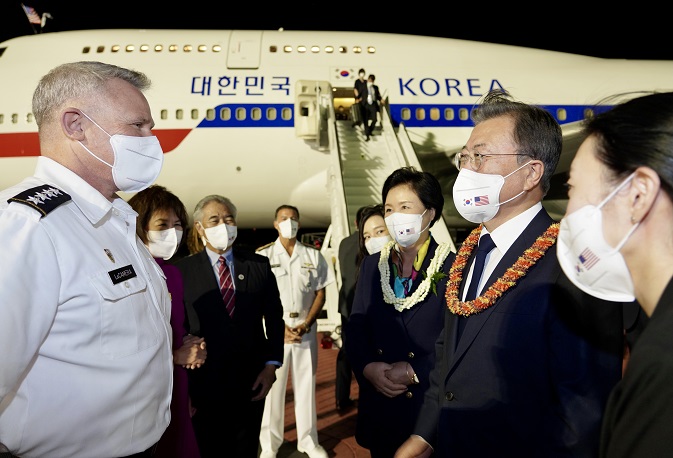 South Korean President Moon Jae-in (2nd from R) is greeted by Adm. John Aquilino, commander of the U.S. Indo-Pacific Command, upon arrival at Hickam Air Force Base in Hawaii on Sept. 21, 2021. (Yonhap)

Moon met separately with Albert Bourla, chairman and CEO of Pfizer, and attended a ceremony to sign memorandums of understanding (MOUs) on South Korea-U.S. vaccine partnership.

It was a follow-up to his White House summit deal with President Joe Biden in May to establish a comprehensive KORUS Global Vaccine Partnership.

In particular, the signing ceremony in New York involved several small-and middle-sized firms and research institutes of the two countries.

It shows that South Korea-U.S. vaccine cooperation, mainly led by biopharmaceutical giants so far, is expanding to smaller ones, according to Cheong Wa Dae.

“Cooperation between South Korean and the U.S. research institutes means that the U.S. has begun to view South Korea as a cooperation partner from a mid-to long-term perspective, not a short-term one,” it said.

Following a two-night stay in New York, Moon made an overnight stopover in Hawaii on his way back home.

He engaged in alliance-related activities, including a meeting with Adm. John Aquilino, commander of the U.S. Indo-Pacific Command, and participation in a ceremony for the transfer of the remains of Korean and American soldiers killed in the 1950-53 Korean War.

Moon has less than nine months in office and his aides say he has no plan, for now, to visit the U.S. before his tenure finishes.