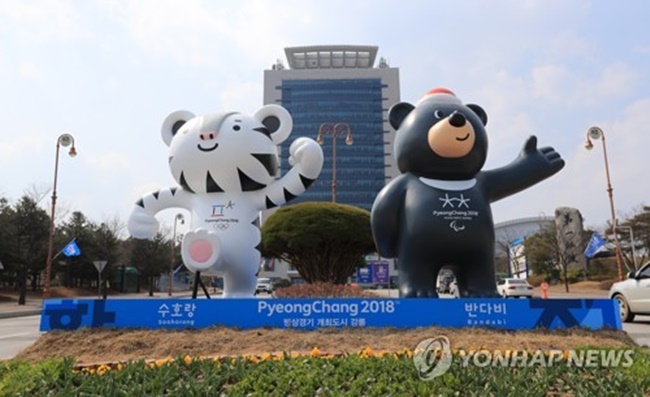 Soohorang (L) and Bandabi, the official mascots of the 2018 PyeongChang Winter Olympics and Winter Paralympics, stand before Gangneung City Hall in Gangneung, Gangwon Province, on March 28, 2017. Gangneung will stage ice events during the competitions. (Image: Yonhap)

The official said the two sides have wrapped up their negotiations that began in February, and will announce their deal in a ceremony at KEB Hana Bank’s headquarters in central Seoul next Tuesday.

The bank will apparently offer 11 billion won (US$9.6 million) in sponsorships, though PyeongChang had earlier said it sought 15 billion won from its top banking partner.

KEB Hana Bank was picked as the preferred negotiating partner two months ago, beating out two candidates in an open bid.

As the main banking partner for the first Winter Olympics to be held in South Korea, KEB Hana Bank will handle ticket sales, among other transactions.

PyeongChang had been struggling to secure sponsorship deals from the financial sector in particular, with the recession and the impact of a major political scandal surrounding former President Park Geun-hye and her confidante, Choi Soon-sil, making companies reluctant to open their wallets.

When the selection of the main banking partner was delayed, PyeongChang was forced to postpone the start of ticket sales from last October to February.