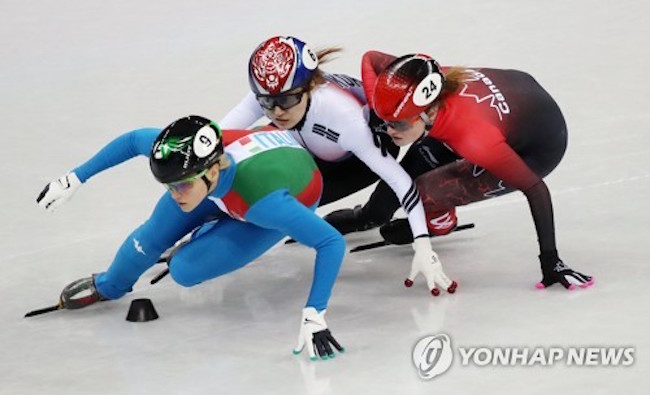 When home favorite Choi Min-jeong finished second in the women’s 500-meter short track finals at the PyeongChang Olympics on Tuesday, the Gangneung Ice Arena was filled with cheers and celebrations for Korea’s first silver medal in the event. (Image: Yonhap)

But a few minutes later, she was disqualified due to impeding Canadian Kim Boutin.

During the high-speed 4.5-lap race, the judges said that Choi had touched Boutin’s knee while trying to make a move on the inside.

But angry South Korean fans rushed to Boutin’s Instagram and Twitter accounts to verbally attack her, including death threats in Korean and English. They blamed the Canadian for Choi’s elimination from the first women’s gold medal event in short track, in which the home country has wielded supremacy over the past decades.

She has shut down her social media account since the incident.

According to Canadian broadcaster CBC, Boutin’s father, Pierre Boutin, received a call from the Canadian skating body and heard that the police, or the RCMP, and the Canadian Olympic Committee (COC) are looking into the case.

“The health, safety and security of all our team members is our top priority and as such we are working closely with Speed Skating Canada, our security personnel and the RCMP,” the COC said in a statement.

But Boutin was not the first victim of online bullying by South Koreans following an, according to them, “Olympic medal-stealing” crash.

In the finals of the women’s 500-meter short track speed skating at the 2014 Winter Olympics, Christie tried to make an inside pass and fell with Park, who was skating in front of the pack. Park finished third to win bronze at the event, while Christie was disqualified.

Right after the race, her Twitter was bombarded with negative comments, insisting that Christie had robbed Park of her gold medal, presumed to be written by South Korean users. The Briton closed down her Twitter and other social media accounts.

In an interview with British media, Christie admitted that she would have left the ice because of such Internet trolls. She even received some psychological treatment.

“It made me feel like I couldn’t carry on competing and competing at an Olympics was a childhood dream,” she said in an interview with the Daily Mail.

The International Olympic Committee (IOC) said such online threats go against the Olympic spirit of friendship and fair sportsmanship.

“We occasionally, unfortunately do have these issues. It’s something we don’t approve of,” said IOC spokesman Marc Adams in a daily briefing Wednesday.