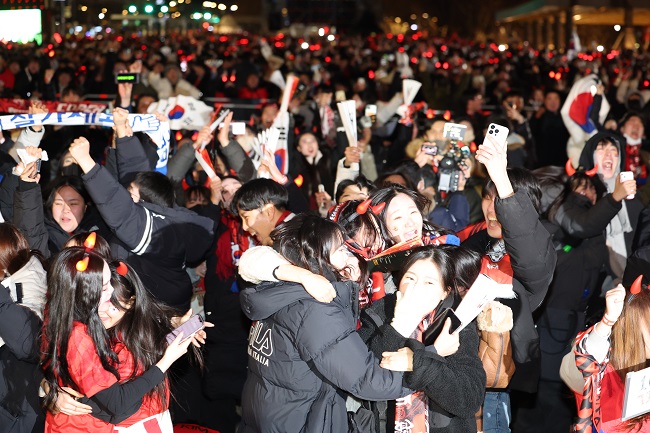 Red Devils, the supporting group for South Korea’s national soccer team, cheer with joy at Seoul’s central Gwanghwamun on Dec. 3, 2022, after the team clinched a 2-1 win over Portugal in the final Group H match at the FIFA World Cup in Qatar. (Yonhap)

SEOUL, Dec. 7 (Korea Bizwire) — Online cheering culture is emerging as a new trend for the 2022 Qatar World Cup, the first World Cup being played in winter.

According to industry sources, the number of cumulative viewers for the round of 16 match between South Korea and Brazil that was broadcasted via Naver, the country’s top portal operator, reached 7.06 million.

Despite the fact that the match began at 4 a.m. Korea Standard Time, many people flocked to the online service.

In the previous Group H matches against Ghana and Portugal that were held earlier in the night on Nov. 28 and Dec. 3, respectively, the tally of cumulative viewers was far higher at 10.67 million and 11.53 million.

Such figures are close to the number of simultaneous viewers for major terrestrial broadcasters.

In Naver’s open chat rooms, in which viewers can upload their messages in real time while viewing live broadcasting, about 500,000 messages were uploaded on average per match.

Of special note, people younger than 30 accounted for 68 percent of the messages uploaded during the three matches in the preliminary round.