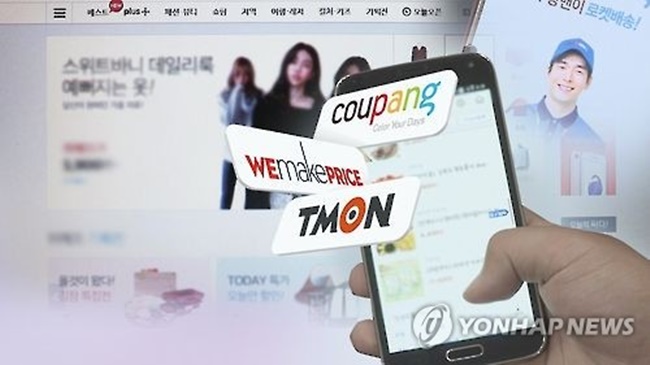 Local e-commerce firms have been suffering consecutive years of losses as fierce competition to win over consumers led to excessive discounts and outlays to offer fast-delivery services. (Image: Yonhap)

Coupang Inc. suffered a combined operating loss of 560 billion won (US$490.8 million) in the January-December period of 2016 compared with 547 billion won from a year earlier, according to the data by the Financial Supervisory Service (FSS). Its sales jumped 64 percent on-year to 1.9 trillion won in the cited period.

The combined operating loss of Ticket Monster Inc., or TMON, came to 158.5 billion won as of end-2016, widening from 145.2 billion won, with the sales reaching 286 billion won, a gain of 46 percent from the previous year.

Local e-commerce firms have been suffering consecutive years of losses as fierce competition to win over consumers led to excessive discounts and outlays to offer fast-delivery services.

WeMakePrice Inc., another open market operator, logged 63.6 billion won in operating losses, although this figure is down 55 percent from a year ago.

An official from Coupang said the company is “moving forward to see beyond” the current climate, and vowed to continue its investment to “offer services that customers have never experienced before.”

TMON said it plans to bolster its newly launched fresh food and travel lineups in a bid to pave a way for a turnaround.

11st, run by SK Planet Co., also suffered some 180 billion in operating losses, with Ebay Korea, the operator of G Market and Auction, chalking up 67 billion won in operating income in 2016, according to FSS data.