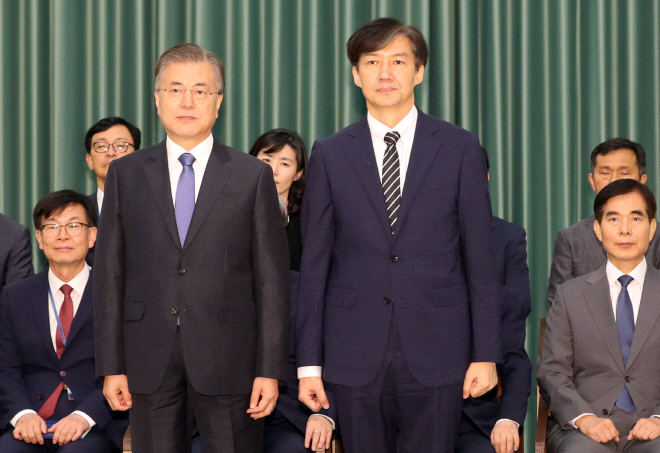 Justice Minister Cho Kuk (R) poses with President Moon Jae-in as he is being sworn in at Cheong Wa Dae in Seoul on Sept. 9, 2019. (Yonhap)

SEOUL, Sept. 20 (Korea Bizwire) — An online survey that measures people’s level of privilege in South Korean society is going viral throughout various online communities following the controversy that a privileged background helped Cho Kuk to be appointed as the new Minister of Justice.

In South Korea, where one’s alma mater forms an important part of one’s reputation, allegations that newly-named Justice Minister Cho Kuk and his professor wife helped their daughter create a fancy academic portfolio that landed her in a prestigious university and medical school sparked fury.

The survey is comprised of ten questions, each of which is worth a single point.

The questions ask the participants if they live in Seoul, if their place of residence cost more than 1 billion won (US$840,000), if they have studied abroad or have a foreign passport, and if they spend more than 1 million won every month.

Positively responding to at least one question qualifies the respondent as an ‘unconsciously privileged’ person.

The survey sparked controversy, however, when it also asked the gender, age, and place of residence of the respondents.

According to Statistics Korea, there are 25.8 million South Korean men out of the country’s total population of 51.8 million. There are 467,000 men who are 50 years old.

Statistics also show that 9.7 million people live in Seoul, which accounts for 19 percent of the country’s entire population.

According to the survey, all of these people are categorized as ‘unconsciously privileged’ persons. The question on gender is leading many to suspect that the survey may have been designed by a feminist organization.

Netizens are not hesitant to show their disappointment over the online survey. “The question on the place of residence, university, gender, and age seem irrelevant,” said one netizen.