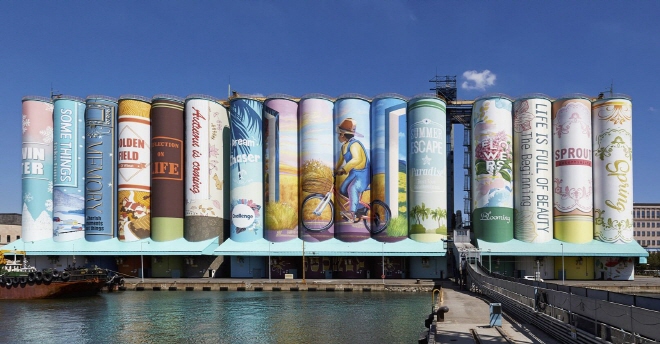 An outdoor mural on a grain silo in the port city of Incheon. (image: Incheon City Government)

INCHEON, Dec. 17 (Korea Bizwire) — An outdoor mural on a grain silo in the port city of Incheon, west of Seoul, has been recognized by Guinness World Records as the world’s largest, the city government said Monday.

Guinness has published the record, which was recognized Sept. 20, on its website.

Previously, the Pueblo Levee Project in Pueblo, in the U.S. state of Colorado, held the Guinness World Record for the largest outdoor mural at 16,554.8 square meters.

The Incheon city government and Incheon Port Authority commissioned 22 painting experts and spent 550 million won (US$487,000) for the mural project since January this year, with 865,400 liters of paint used in its creation.

The mural’s design involves the story of a boy growing into an adult and resembles a complete set of 16 books with cover decorations showing the four seasons — spring, summer, autumn and winter.

According to the city government and the port operator, the project was part of efforts to improve the negative view of aged industrial facilities and originated from the community art projects of the 1920s that swept the United States and Mexico and focused on giant and colorful murals in an effort to bring residents and businesses together.

Officials at the government and the port operator hope the mural will give a boost to tourism on Wolmi Island, one of top tourist spots located near the Port of Incheon.