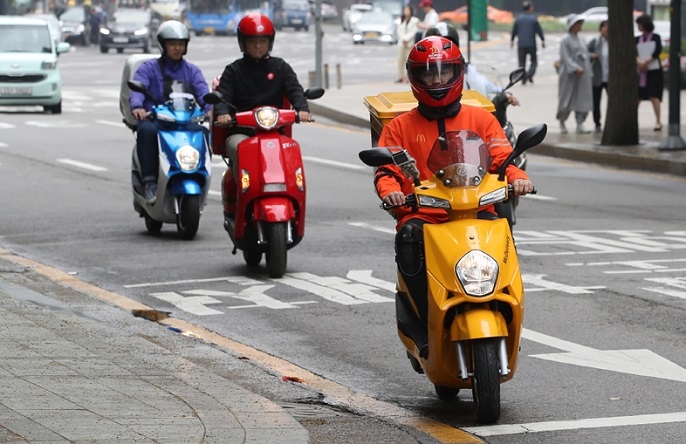 SEOUL, Oct. 8 (Korea Bizwire) — More than half of the purchase subsidies that the South Korean government disbursed for purchases of electric two-wheelers last year turned out to be for ‘Made in China’ products.

Rep. Kim Sung-whan, a lawmaker of the ruling Democratic Party, said on Wednesday during the parliamentary inspection of the Ministry of Trade, Industry and Energy that the nation’s electric two-wheeler subsidy policy was distorted in favor of importers of Chinese products.

Kim claimed that the amount of purchase subsidies given to electric two-wheelers last year totaled 27.5 billion won (US$23.7 million), of which 52 percent or 14.3 billion won was given to complete Chinese products and ones with minor modifications in appearance after being imported.

There were some cases where the amount of purchase subsidies was higher than the import price, thereby resulting in the distribution of ‘free electric two-wheelers.’

As an evidence for his claim, Kim presented an advertisement that features an electric two-wheeler eligible for a purchase subsidy being marketed for free.

Unlike automobiles, the vehicle identification numbers of electric two-wheelers are poorly managed, with the subsidies being given simply through document reviews without the actual products being checked.