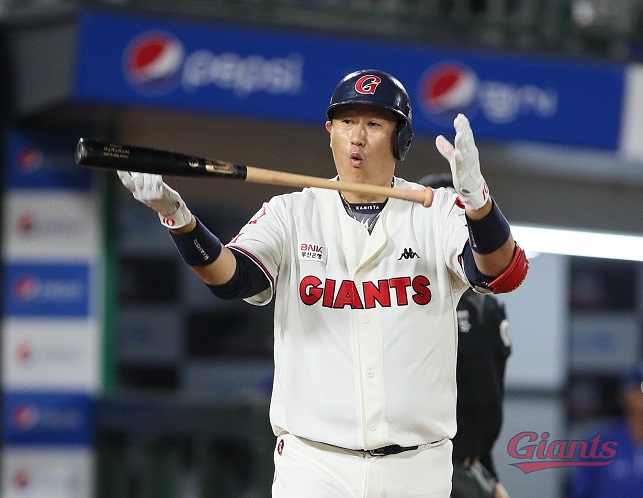 Lee Dae-ho of the Lotte Giants tosses his bat after hitting a grand slam against the Samsung Lions during the bottom of the third inning of a Korea Baseball Organization regular season game at Sajik Stadium in Busan, 325 kilometers southeast of Seoul, on Aug. 26, 2022, in this photo provided by the Giants.

SEOUL, Sept. 1 (Korea Bizwire) — More than half of South Korean baseball fans think tossing the bat with flair after home runs can help increase the popularity of the game, a survey showed Thursday.

Realmeter polled 500 South Koreans over 18 on Aug. 12 on bat flips. The survey had a 95 percent confidence level, with a margin of error of plus or minus 4.4 percentage points.

And 52.2 percent said bat flips help drive up interest in the sport, compared with 29.2 percent who said they weren’t a fan of the act because it may offend opponents. The rest, 18.6 percent, said they didn’t lean one way or the other.

Bat flips have long been a defining feature of the Korea Baseball Organization (KBO), the top South Korean professional league celebrating its 40th anniversary this year.

After home runs or sometimes even foul balls and eventual flyouts, KBO players often throw their bats aside with authority and abandon.

Bat flips are still generally frowned upon in Major League Baseball (MLB), where such an act is considered disrespectful.

Dramatic bat flips have led to bench-clearing brawls and sparked debates on the merits of old baseball codes or unwritten rules that make tossing the bat such an abhorrent act.

Among a younger generation of MLB fans, or those who’d like to see their favorite players show more emotion on the field, bat flips by KBO players have been a big hit.

Clips of KBO stars’ bat flips have gone viral on social media and even made highlight reels on MLB’s official website.

Fans in the United States and elsewhere got a closer look at bat flips in the KBO in 2020, when the American sports cable giant ESPN carried live KBO games with the MLB season cut short due to the COVID-19 pandemic. 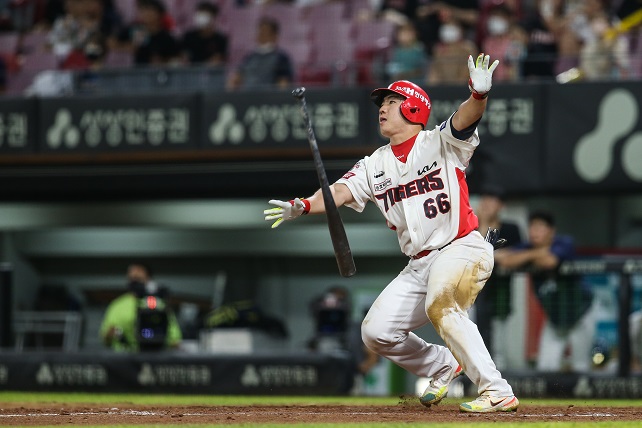 In this Aug. 18, 2022, file photo provided by the Kia Tigers, Lee Chang-jin of the Tigers flips his bat after hitting a three-run, walkoff home run against the NC Dinos during the bottom of the 10th inning of a Korea Baseball Organization regular season game at Gwangju-Kia Champions Field in Gwangju, 270 kilometers south of Seoul.

Realmeter also asked those polled why they thought KBO bat flips were so popular among American baseball fans.

And 36.1 percent responded it is because Americans probably find bat flips to be a part of a unique Korean baseball culture, while 34.1 percent said U.S. baseball fans must enjoy getting their bat flip fix from watching KBO highlights since they don’t see as many flips in MLB.

Realmeter said people in all but one age group said they liked bat flips. The 30-somethings led the way, with 67.2 percent of them saying they were fans of the act.

Those in their 60s and older were the only exception, with 37.3 percent saying they didn’t like bat flips and 35.3 percent responding that they liked the act.

By region, nearly 61 percent of the respondents in Seoul said they liked bat flips.

In Daegu and North Gyeongsang Province, the southeastern part of the country, only 38 percent said they were fans of bat flips, though that number was still higher than opponents of the flips (33.3 percent).