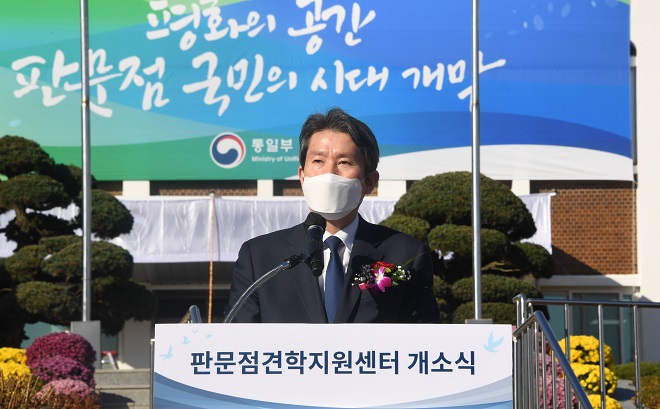 Unification Minister Lee In-young speaks during the opening ceremony for a tourism support center in the truce village of Panmunjom, in this photo provided by the Press Corps on Nov. 4, 2020. (Yonhap)

Lee made the remarks in a speech at the opening ceremony for a tourism support center held at Panmunjom to mark the resumption of tours to the truce border village after more than a year of suspension caused by the spread of the African swine fever.

“I hope the communications line between the South’s Freedom House and the North’s Panmungak that remains unresponsive will be restored,” Lee said.

“I also hope the South-North joint liaison office will be restored swiftly and surely and put back in operation.”

In June, North Korea blew up the liaison office in its border town of Kaesong in June in protest of anti-Pyongyang leaflets sent from Seoul and cut all cross-border communications lines. Pyongyang has not responded to Seoul’s calls for their restoration.

Lee also urged the North to implement a military deal signed in 2018 to allow people of the two countries to freely move around in the truce village, while proposing holding reunions of families separated by the 1950-53 Korean War in the area.

“I hope that such small efforts will add up and eventually lead to a historic moment where we can put an end to division right here at Panmunjom,” Lee said.

Lee said that the opening of the tourism support center will help streamline the process of applications for tours to Panmunjom, saying it will provide them with a chance to enjoy “peace” in the symbolic area for division in a more convenient manner.

Patrick Gauchat, chief of the Swiss delegation at the Neutral Nations Supervisory Commission (NNSC), welcomed the opening of the center, saying he hopes it will contribute to advancing a “path toward peace.”

“All efforts to achieve peace deserve attention and support,” he said.

“This new visitor center and system will raise awareness of the general public. On behalf of the NNCS, we hope the effort toward advancing a path toward peace can be realized by many visitors.”

Meanwhile, tours to Panmunjom began on a trial basis Wednesday with its official resumption scheduled for Friday.

The reopening came after the tours have been put on hold since October last year amid worries about the spread of the African swine fever.

The unification ministry said that it decided to resume the tours as there have been no reports of ASF outbreaks near the area in recent months.

It vowed to take necessary precautions at the tour sites, including disinfecting vehicles and conducting temperature checks on visitors.