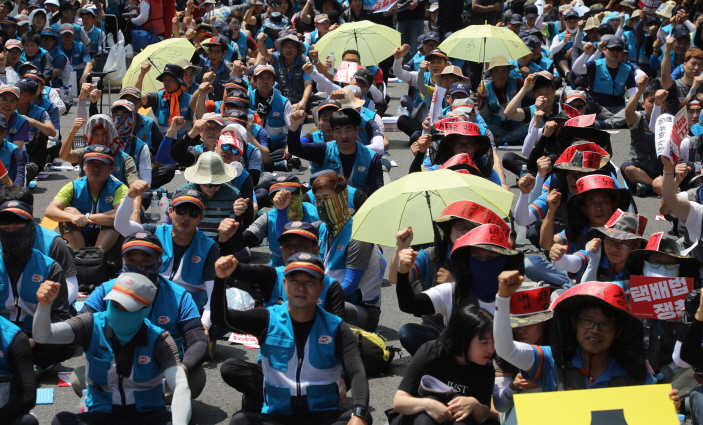 Groups of parcel delivery service workers’ unions held a demonstration near the presidential office Cheong Wa Dae on Monday calling on the government to protect their rights. (Yonhap)

Groups of parcel delivery service workers’ unions held a demonstration near the presidential office Cheong Wa Dae on Monday calling on the government to protect their rights.

“We are not machines made for delivery,” said the protesters.

“There are no laws that protect the delivery workers. Since they have a special legal status different from other laborers, they are sidelined from even the most basic forms of protection ensured by the Labor Standards Act.”

“Besides the negligent government authorities, several conglomerates are rejecting the establishment of a labor union among parcel workers, as well as basic negotiations,” they added.

On the new bill currently being pushed by the government for distribution services, the protesters emphasized that it should be designed “to respect the values of labor, endow the sense of ownership to the laborers, and overhaul the current system where parcel workers are constantly threatened by contractual relationships and other malpractices”.