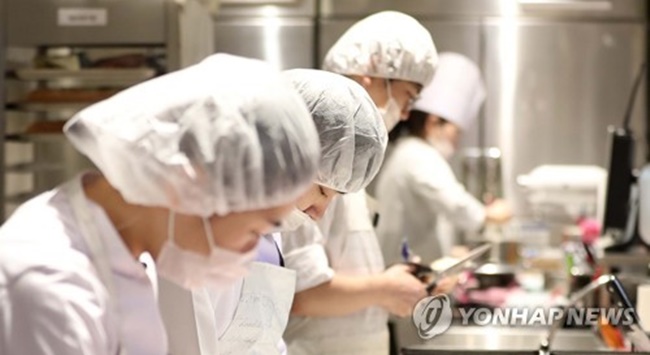 In late September, the Ministry of Employment and Labor said the company violated the country’s labor law in connection with the hiringconditions of more than 5,300 of bakers and cafe workers at its franchise stores, ordering it to address the problem in two months. (Image: Yonhap)

SEOUL, Dec. 5 (Korea Bizwire) – Paris Baguette, a leading bakery franchise of South Korean food and beverage giant SPC Group, is expected to faceup to tens of billions of won in fines for failing to follow the government’s order to directly hire bakers at its stores, authorities said Tuesday.

In late September, the Ministry of Employment and Labor said the company violated the country’s labor law in connection with the hiringconditions of more than 5,300 of bakers and cafe workers at its franchise stores, ordering it to address the problem in two months.

The bakery chain has been accused of giving direct work orders, including recipe training, to outsourced workers with job contracts with its hiring-related subcontractors, a practice the ministry says is illegal.

As the deadline to resolve the issue was set to expire as of Tuesday, the government said it will officially launch procedures to levy a fine on the company on Wednesday.

Paris Baguette had sought an injunction to suspend the efficacy of the instruction until a separate court decision is made regarding the legitimacy of the government’s intervention, but the Seoul Administrative Court rejected the petition last week.

Following the latest legal decision, the bakery chain operator established a joint venture dedicated to hiring and educating employees together with its franchisees and subcontractors. The company has maintained that it is impossible to hire all the workers on its own.

The fine on the bakery chain was originally estimated at 53 billion won (US$48.75 million) — 10 million won per employee — but the government said it will not levy the penalty for those workers who have opposed direct hiring by Paris Baguette.

The bakery chain said it has obtained agreement from some 70 percent of the outsourced workers to give up on being directly hired by the company, but the ministry said it will separately check the authenticity of the consent.

“We are not yet sure how much time it will take to calculate the final amount of penalty, though it won’t take months,” a ministry official said.

The government plans to refer the case to the prosecution.

“It is regrettable that the ministry has declined to extend the deadline which was needed for us to talk with workers who have not yet agreed toparticipate in the joint venture scheme,” the company said in a statement.