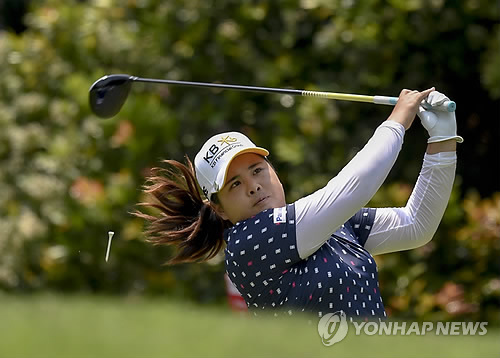 Park enjoyed a wire-to-wire victory at the HSBC Women’s Champions with a four-round total of 15-under 273 on the Serapong Course at Sentosa Golf Club in Singapore. (image courtesy of Yonhap)

Park enjoyed a wire-to-wire victory at the HSBC Women’s Champions with a four-round total of 15-under 273 on the Serapong Course at Sentosa Golf Club in Singapore. World No. 1 Lydia Ko finished two shots back in second place, while No. 3-ranked Stacy Lewis finished third at 11-under.

Park, who didn’t make a bogey all week for her first win of 2015, is the fourth different South Korean winner in five LPGA Tour events so far this season. Ko, a South Korean-born Kiwi, is the other winner.

Park took home US$210,000 in the winner’s check to rise to third on the money list this season but will remain No. 2 behind Ko when the world rankings are updated Monday.

This was Park’s eighth appearance at this tournament. Her best previous performance came last year when she tied for fourth place.

Park, Ko and Lewis played in the final group on Sunday, with Park holding the overnight lead at 13-under and Ko and Lewis tied in second place at 11-under.

Park parred her first six holes, while Ko made consecutive birdies on the fourth and fifth to pull even and Lewis also had a birdie on the fourth.

Park and Ko remained tied for the lead at 14-under after both had a birdie on the seventh, while Lewis trailed by two strokes. Then Ko blinked first with a bogey on the eighth, and Park made the turn with a one-shot advantage.

Ko then shot herself out of contention with bogeys on the 12th and 13th. Lewis erased her bogey on the 10th with a birdie on the 13th, only to drop another shot behind with a bogey on the 18th. Park’s only other birdie of the day came on the 11th and it was more than enough for a comfortable win. 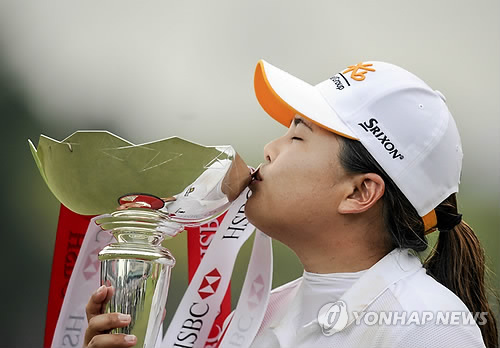 Park In-bee kisses the winner’s trophy after capturing the HSBC Women’s Champions on the LPGA Tour in Singapore on March 8, 2015. (Yonhap)

Park has led or tied for the lead after three rounds 13 times in her career and has won on seven of those occasions.

Three more South Koreans finished inside the top 10: Ryu So-yeon tied for fourth at 10-under, while Lee Il-hee and Kim Hyo-joo were among four golfers tied for eighth at eight-under.