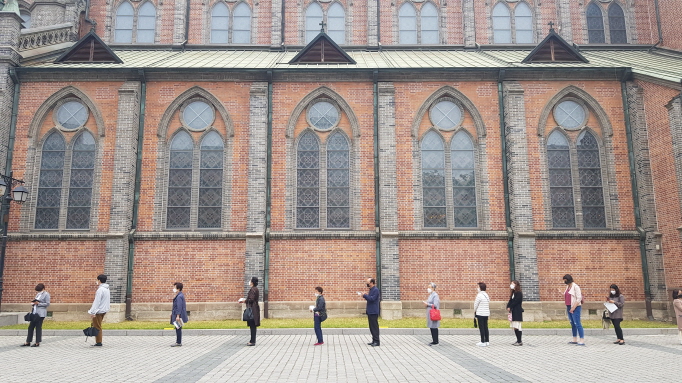 People form a line with space between them at a Catholic church in central Seoul on May 3, 2020, amid the new coronavirus pandemic. (Yonhap)

SEOUL, May 4 (Korea Bizwire) — South Korea on Monday began paying out emergency disaster relief funds totaling 14.3 trillion won (US$11.65 billion) to all households to cope with the economic impact of the coronavirus outbreak.

The National Assembly last Thursday approved an extra budget bill focused on the payments of the unprecedented relief money to all 21.71 million households in the nation.

The payments of the one-off handouts started with some 2.8 million households in the lowest income bracket, or 13 percent of the total, and will be expanded to cover the rest over the next three months.

According to the Ministry of the Interior and Safety, it has given a combined 1.29 trillion won in cash to the first-group households living off basic livelihood subsidies, basic pensions and disability benefits as of 6 p.m.

The ministry said the recipients are able to check the cash deposits in the bank accounts they are already using to receive the various state subsidies.

The timing of the payment can differ depending on the circumstances of local governments but all the cash remittances will be completed by Friday, the ministry noted.

The rest of the nation’s households will be paid the disaster relief funds in the form of credit or debit card points, regional gift certificates or prepaid cards, beginning next week, it said.

Online applications for credit or debit card points will begin next Monday via the websites of card companies and the point payments will be made two days later.

Offline applications for card points, gift certificates and prepaid cards will begin at banks affiliated with card companies or community centers nationwide May 18. Some cards, including those from Citibank, are excluded from the service.

The ministry said the public can check their household eligibility for the disaster relief funds at the relevant government website from Monday.

To prevent the overloading of the web servers, the online reference and application services can be used only on designated days for each individuals, depending on the last digit of one’s birth year, just like the ongoing mask rationing system.

Households failing to apply for the emergency relief funds within three months will be regarded as donors to the state.

The disaster relief money should be spent by Aug. 31 or it will also be deemed a donation. Likewise, it is recommended that regional gift certificates are used by the end of August.

The emergency relief card points, gift certificates and prepaid cards cannot be used for online shopping and at large-scale supermarkets and entertainment places, among others, the ministry said.

Meanwhile, the government approved in a Cabinet meeting a proposed plan to spend 940 billion won to stabilize the livelihoods of underprivileged workers hit by COVID-19.

The emergency spending plan includes the provision of up to 1.5 million won to workers, such as freelancers and those working in designated-driver and delivery services.