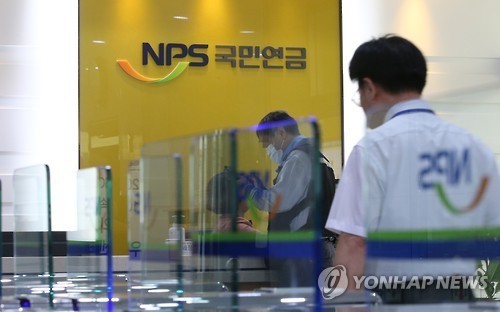 sources say that the operator decided to support the merger considering its potential influence on the fund’s earning rates. (image courtesy of Yonhap)

SEOUL, July 10 (Korea Bizwire) – South Korea’s national pension fund operator on Friday decided its official stance on a merger between key subsidiaries of Samsung Group, the country’s leading family-controlled conglomerate, but won’t disclose what the stance is for the time being, officials said.

But sources say that the operator decided to support the merger considering its potential influence on the fund’s earning rates.

“The National Pension Service (NPS) decided on whether to support or oppose the merger between Samsung C&T Corp. and Cheil Industries Inc. during an investment committee meeting of its fund management office,” a ranking official of the Ministry of Health and Welfare said, asking not to be named. “Details of the decision will be made public after a shareholders’ meeting of Samsung C&T Corp. on next Friday.”

The shareholders’ meeting is to vote on the merger plan.

The NPS is the largest shareholder of Samsung C&T, a construction and trade arm of Samsung Group, with an 11.61 percent stake. It also has a 5.04 percent stake in Cheil Industries Inc., Samsung’s de facto holding company.

“We will not disclose details of the decision considering the issue’s sensitivity and its far-reaching influence,” an NPS official said, also on condition of anonymity.

The investment committee meeting lasted about four hours from 3 p.m. without participation from outside experts.

Sources say, however, that the participants agreed to support the merger fearing that if it fails, it will potentially bring down the stock prices of the two Samsung units and drop earning rates of the pension fund in the stock market.

Earlier in the day, the U.S. hedge fund Elliott Associates, the Samsung C&T’s third largest shareholder, called on the NPS to support its opposition to the merger plan.

“We expect that NPS — entrusted with the hard-earned capital of ordinary Koreans — will choose to make the proper financial decision to oppose these wholly unfair takeover proposals,” Elliott said in its latest statement. The company has a 7.12 percent stake in Samsung C&T.

Market watchers say the stance of the NPS will likely determine the fate of the proposed merger.

The proposed merger must win approval from shareholders with two-thirds of the voting rights and a third of outstanding shares. Elliott can have the plan scrapped by obtaining more than 23 percent of friendly shares.

“The undeniable evidence of this outpouring of opposition is tens of millions of shares which have been confirmed as a vote against and/or provided as proxies for Elliott to oppose this proposed takeover,” Elliott also said.

The merger, meanwhile, is also widely seen as aimed at paving the way for the transfer of power from hospitalized tycoon Lee Kun-hee, South Korea’s richest man, to his only son, Jay-yong.

Once the merger is completed, Jay-yong will become the biggest shareholder of the merged entity with a 16.5 percent stake and rise to the top of the group’s hierarchy. The new merged entity will keep the name Samsung C&T as it is one of the original arms of Samsung Group.

In two separate rulings, a local court said that the proposed merger is reasonable and legitimate, lending support to Samsung’s latest restructuring move.

“The NPS should cast a yes ballot on the merger, considering the mid- and long-term impact of its decision on the national economy,” said Prof. Oh Jung-geun of Konkuk University in Seoul.

“If the merger plan is scrapped, South Korea’s major firms will be more vulnerable to ‘vulture funds,’ which will hinder investment and bring about a slump in the local economy.”

Samsung C&T, meanwhile, said it will set up a special committee of five experts that will oversee issues regarding shareholders’ rights after the merger.

The company also said it will allocate 0.5 percent of its operating profit for social welfare businesses, and hold regular meetings with shareholders to listen to their opinions.’