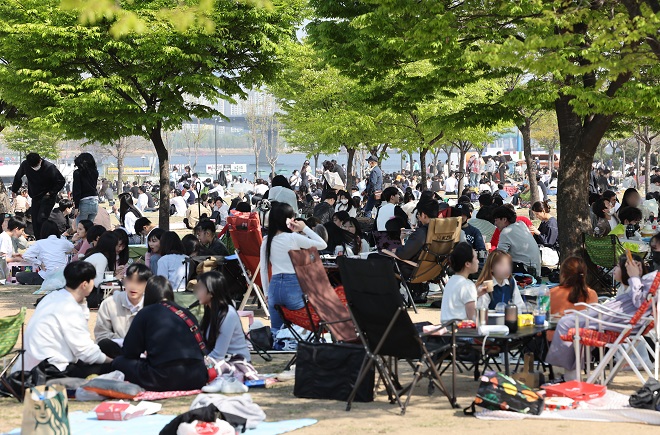 SEOUL, April 21 (Korea Bizwire) — Picnics and beer drinking are back at parks along Seoul’s Han River after the lifting of social distancing requirements.

Starting this week, all COVID-19 social distancing requirements, except the mask mandate, were lifted, including a curfew on operating hours of restaurants, cafes and other small businesses, as well as the cap on the size of private gatherings.

About a dozen parks on the river banks are now free of any gathering restrictions.

Groups of people were picnicking in the sunny afternoon Wednesday at Banpo Han River Park near the southern namesake district while convenience stores were abuzz with people purchasing canned beers and snacks for a refreshing break along the river, a common scene before COVID-19.

“Since the COVID-19 outbreak, I hadn’t come here due to worries and infection prevention rules. I came here today to enjoy myself, my first visit to Han River in about 2 1/2 years,” Jeong Ji-eun, a 29-year-old office worker from Suwon just outside of Seoul, told Yonhap News Agency.

She took a day off from work to enjoy the Han River on a less crowded weekday. “I like it very much. It’s as if the previous normalcy has finally returned.” 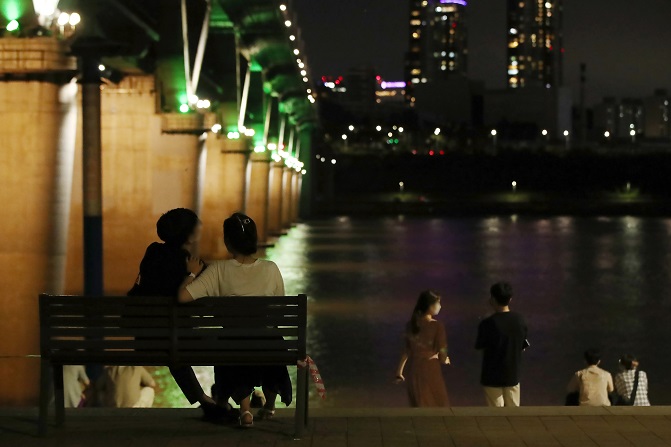 This photo shows people at leisure alongside the Han River. (Yonhap)

Kim Min-sang, a 23-year-old student, was having a light drinking session with nine friends under a tent.

“I hardly came here for the past year. After finishing the mid-term exam, I came here today to have fun with friends, and I am so delighted,” he said.

Other citizens also came out to stroll along the river or walk their dogs.

“I saw on social media that the rainbow fountain of the Banpo Bridge (across the Han River) will return soon, and I will be busy this season visiting that place too,” said 24-year-old Shin Ludia who was walking her dog in the park.

A Seoul city government official said the city is also reviewing whether to resume the food truck festival known as “Bamdokkaebi” night market, which it had operated before the pandemic, in line with the country’s gradual return to pre-pandemic normalcy.