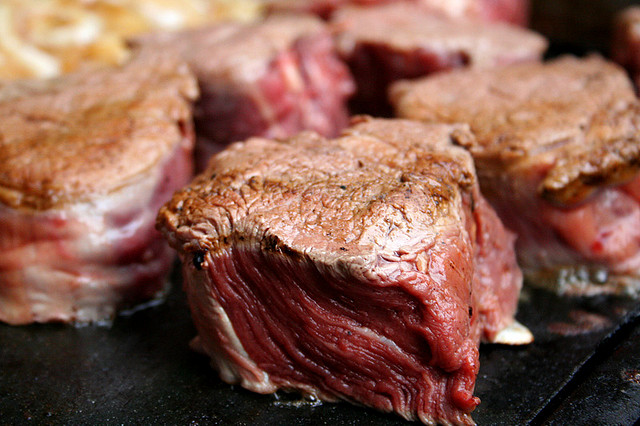 Red meat is a good source of protein, minerals and vitamins, but research increasingly suggests too much is bad for long-term health. (image: Sheila/flickr)

SEOUL, July 29 (Korea Bizwire) – Dutch scientists have discovered the reason why red meat increases the possibilities of colorectal cancer. The pigment in the meat should be blamed for colon cancer, they argued.

The research team from the University of Utrecht recently announced that it had discovered the mechanism explaining why red meat causes colon cancer. The team injected a pigment (haem) from hemoglobin into lab mice, and found that the mice suffered damage to the inside wall of their intestines.

They discovered that bacteria in the gut turned the haem, a part of the hemoglobin that binds in oxygen to allow it to be transported around the body, into hydrogen sulphide, which damaged the gut.

To cure the damage, the body grows cells rapidly, but the rapid cell renewal causes cancer, the researchers argued.

Accordingly, they argued that any drug that kills bacteria in the gut could prevent cancer caused by red meat. The research was published in the journal Proceedings of the National Academy of Sciences (PNAS).

Colon cancer is one of the major causes of death in Western countries, where meat is a staple. As Korean dietary culture is rapidly being westernized, the cancer has become common among Koreans.

According to other studies, red meat is also related to heart attack, breast cancer, diabetes, and prostate cancer.

Red meat is a good source of protein, minerals and vitamins, but research increasingly suggests too much is bad for long-term health.