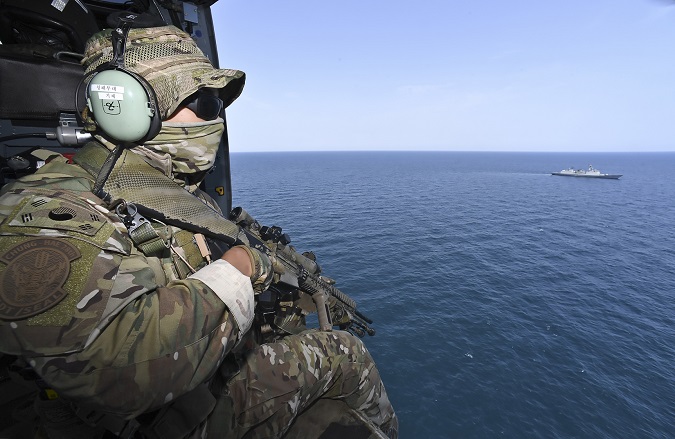 A Navy serviceman of South Korea’s anti-piracy unit Cheonghae stands guard in this photo from the Navy on March 12, 2019. Cheonghae, which operates in the Gulf of Aden to ensure the safety of South Korean and foreign vessels, will mark its 10th founding anniversary on March 13.

The number of pirate attacks targeting South Korean ships came to 97 during the January-September period, down 27 percent from the previous year’s 132 cases, according to the ministry.

The decline stemmed mostly from a fall in attacks in waters off western Africa, apparently thanks to recently beefed-up anti-piracy efforts off Nigeria.

During the cited period, 28 pirate attacks on Korean ships were reported from the region, down from 44 cases reported a year earlier, the ministry said.

Pirate attacks on Korean ships in the Asian region also dropped 37 percent on-year to 39 from the previous year’s 62, the ministry said.

Of them, 20 attacks were reported in the Singapore Strait, a major shipping route for South Korean vessels, making up 51 percent of all pirate-related incidents in the Asian region.

The ministry said most pirate attacks in Asia are robberies, which can be heavily reduced by simply deploying more crew members to look out for threats while their ships are anchored or sailing.