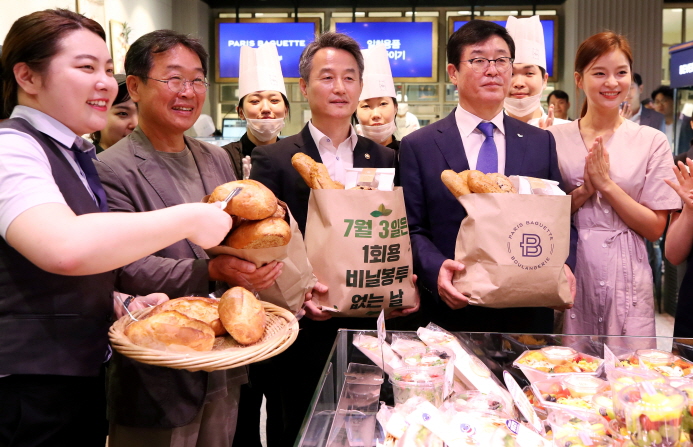 Paris Baguette and Tous Les Jours signed a voluntary agreement on July 2 last year to reduce the use of disposable products. (Yonhap)

SEOUL, Jul. 3 (Korea Bizwire) — The use of plastic bags of Paris Baguette and Tous Les Jours, two of the leading bakery chains in South Korea, has been reported to have decreased significantly in the past year.

The Ministry of Environment unveiled Tuesday the results of the two bakery chains’ resolution on reducing the use of plastic bags.

Paris Baguette and Tous Les Jours signed a voluntary agreement on July 2 last year to reduce the use of disposable products.

It was in October last year that the companies really saw the beginning of plastic bag reduction. Free plastic bags were banned from January of this year.

The number is 78.6 percent down compared to the point at which the reduction of single-use products was implemented.

In particular, Paris Baguette drastically reduced its use of plastic bags thanks to the full introduction of recycled paper bags instead of plastic bags, according to the ministry.

Comparing the use of plastic bags with the figure when free plastic bags were banned, the decrease in use is more pronounced at 83.7 percent.