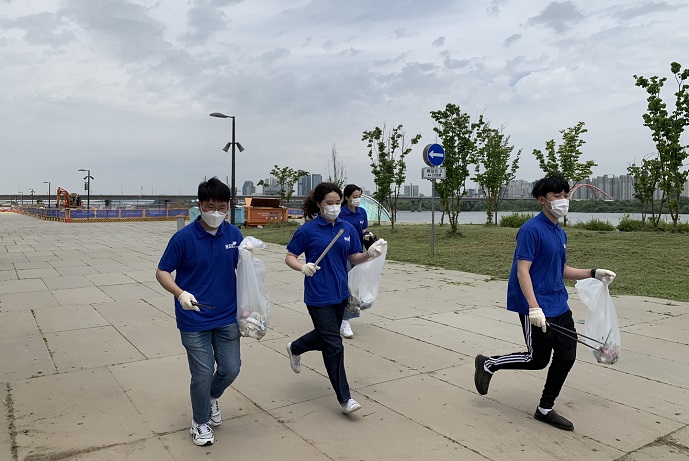 This photo provided by BHC Co. shows its employees collecting trash in the Han River in Yeouido, western Seoul.

SEOUL, Sept. 13 (Korea Bizwire) — Plogging is rising as a new trend among members of the “MZ generation,” a Korean term referring to millennials and Generation Z, to protect the environment.

The term ‘plogging’ is a combination of the terms ‘jogging’ and ‘plocka upp,’ Swedish for picking up grain. It refers to the act of picking up trash while jogging.

Kim Hyeon-soo, a 25-year-old plogger who has been jogging around a local university campus in Yongin, Gyeonggi Province, to pick up trash since August of last year, said that trash isn’t just something to throw away, but something that can be “remade into something valuable, like a toy.”

Experts explain that plogging is a combination of interest in environmental protection and affection for space.

“There has been an increasing interest in both indoor and outdoor spaces,” said Lee Eun-hee, a professor of consumer studies at Inha University. “People are sharing ways to express environmental values on social media platforms.”

Ploggers said that cigarettes are what they find in the streets the most.

The Korean Federation for Environmental Movements said that cigarettes accounted for 54 percent of all trash collected in 13 regions across the country last year.