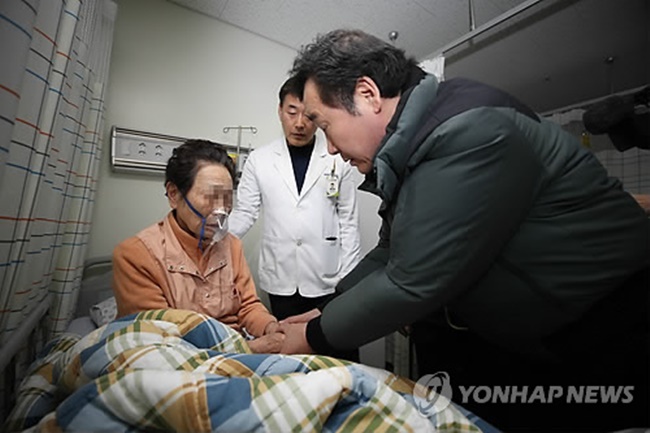 SEOUL/MIRYANG, South Korea, Jan. 26 (Korea Bizwire) – Prime Minister Lee Nak-yon ordered a thorough investigation Friday into what caused the massive death toll in a hospital fire in the southeastern city of Miryang, after the blaze left at least 37 people dead and more than 70 others injured.

Lee made the remark during a visit to the situation room set up at the city hall of Miryang, 280 km southeast of Seoul, amid fears that the death toll could rise further as some of those injured are in a serious condition.

“There can be questions about how this amount of damage occurred in such a short period of time,” Lee said. “We have to offer convincing explanations to the people in a detailed and transparent manner and determine who is responsible.”

The fire broke out around 7:30 a.m. at Sejong Hospital, which has 193 beds. Witnesses said the blaze started in the hospital’s emergency room on the first floor. The flames didn’t spread to other floors.

Most of the fatalities are believed to have died from inhaling toxic gas. The dead include one doctor, a nurse and an assistant nurse.

Lee also offered an apology, noting that the government promised to take steps to prevent such a disaster from happening again when a fire at a sports center in the central city of Jecheon killed 29 people last month.

“We promised to make sure this kind of incident won’t happen again, and I’m ashamed to say the same thing,” he said. “Accidents come in various types, and it is our obligation to prevent a recurrence after learning from this painful experience.”
Lee promised to provide as much state support for victims as possible.

“I think no words can comfort the families (of victims),” he said. “We’re thinking deeply about the shock and pain that the families must be going through. The local and the central government will provide sincere support for the families.”

The interior and safety ministry said it dispatched an interagency team of officials to the site to help cope with the aftermath of the disaster. The 30-member team comprises officials from the interior ministry, the national fire agency, the health ministry, the labor ministry and the land and transport ministry.

The government also plans to assign one official to the family of each victim to help with medical treatment, funeral and other matters, officials said. The government will also send additional doctors and medical staff to 14 hospitals where those injured are being treated.