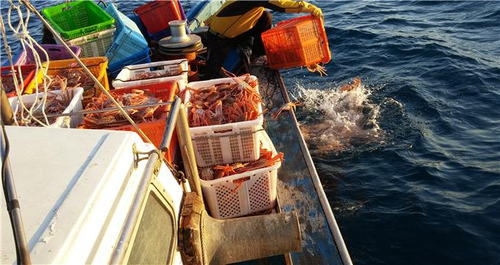 After the arrests, Pohang authorities released all of the remaining crabs into the sea. (image: Yonhap)

The two culprits kept 1,450 female snow crabs and 8,600 baby crabs in a tank at a building in Nam-gu, and sold them online through personal blog pages. After the arrests, Pohang authorities released all of the remaining crabs into the sea.

Not long ago, Pohang authorities detained the crews of 7 fishing vessels who were caught illegally fishing for female snow crabs, as well as several distributors around Daejinri Port. Another distributor was arrested at a site around Songdo-dong.

Due to the recent increase in illegal poaching activities, city officials are set to carry out an intensive crackdown on poachers and vendors at ports and markets in Pohang until the end of May.

The city government also held a special seminar on the illegal poaching and distribution of marine animals on February 12. Participants of the seminar also conducted a street campaign against illegal poaching.