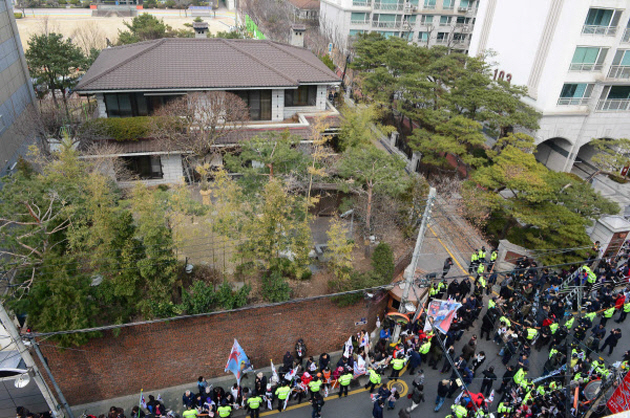 Former President Park’s supporters have rallied everyday outside her house in Samseong neighborhood, southern Seoul, since the Constitutional Court to dismiss her. (image: Yonhap)

SEOUL, Mar. 16 (Korea Bizwire) — Education officials said Wednesday they have asked police to protect children passing by the house of former President Park Geun-hye as protesters continue to gather there to rally against her dismissal.

The Seoul Metropolitan Office of Education made the request in a letter to Gangnam Police Station, saying it fears for the safety of children attending Samreung Elementary School, which is adjacent to Park’s home, according to the officials. The school also made a similar request to the police and the Gangnam District Office.’

Park’s supporters have rallied everyday outside the house in Samseong neighborhood, southern Seoul, since the Constitutional Court ruled Friday to dismiss her over a corruption scandal. Park returned to her home two days later.

Some school children have expressed fear at the sight of the protesters shouting and sometimes using violence.

The education office asked in its letter that police restrain protesters in case they become violent or use inappropriate words for the sake of the children. It also requested police control traffic in the area as reporters and protesters bring their cars.

“For now, the rallies are not that large and the slogans heard aren’t very loud, so there isn’t a major disruption to our studies,” a school official said. “We will watch the situation for a while and if our studies are disrupted, we plan to seek a ban on the rallies.”

Police will control the rallies to ensure the students aren’t affected and apply stricter regulations on noise levels, a police official said.