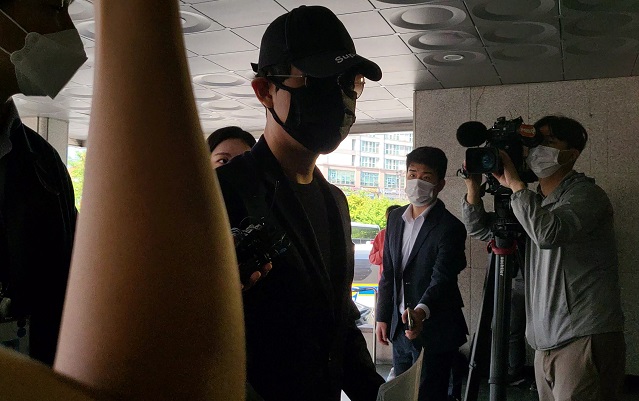 A crypto investor (C), accused of ringing the doorbell of the apartment of Do Kwon, co-founder and CEO of Terraform Labs, enters Seongdong Police Station in Seoul on May 16, 2022. (Yonhap)

SEOUL, May 25 (Korea Bizwire) — Police said Wednesday they have wrapped up an investigation into a crypto investor accused of trespassing at the apartment of Do Kwon, co-founder and CEO of Terraform Labs, and sent the case to the prosecution suggesting he be indicted.

The suspect, whose identity has been withheld, allegedly entered the apartment complex in eastern Seoul through a main entrance gate while another resident was entering on May 12, then rang the doorbell, looking for Kwon, while his wife was at home, according to Seongdong Police Station.

Kwon is at the center of the massive collapse of TerraUSD, a so-called stablecoin that is meant to maintain a US$1 peg, and its digital coin counterpart, Luna, which had been trading in the 10 cent range and at nearly zero, respectively, registering more than 99.99 percent falls from their highs and wiping out billions of investors’ money globally.

The suspect, who operates an online broadcasting channel, claims he has lost about 2 to 3 billion won ($2.3 million). He has urged Kwon to apologize to over 200,000 investors who have lost their savings.