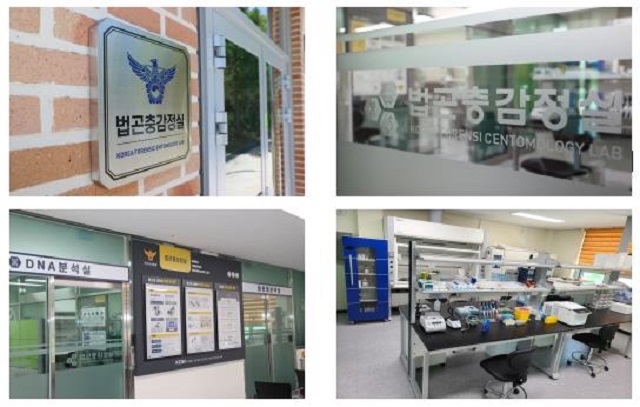 These images provided by the National Police Agency show the Korea Forensic Entomology Lab inside the Korean Police Investigation Academy in Asan, about 87 kilometers south of Seoul.

The Korea Forensic Entomology Lab began operations at the Korean Police Investigation Academy in Asan, about 87 kilometers south of Seoul, according to the police.

Forensic entomology is the study of the application of insect science in criminal investigations, increasingly being used in determining the time of a victim’s death in criminal cases.

Based on knowledge about the different life cycles of each insect, the study analyzes the presence and growth of insects in cadavers to pin down the timing of death, often providing more accurate results on cadavers in later stages of decomposition than via the traditional examination of purple spots, stiffness or the content of the stomach.

The technique has emerged to play a key role in criminal investigations, but it has been only sporadically mobilized due largely to a shortage of human resources.

Police said the launch of the entomology lab will give a boost to the technique’s utilization as well as the compilation of a related database, especially those involving insects specific to the Korean climate and regional characteristics.

Ahead of the lab’s launch, the National Police Agency ran a five-year preparation project in collaboration with a forensic lab at Korea University, building a preliminary database on the life cycle of three types of flies endemic in Korea, officials said.

On top of the study estimating the time of death, the new lab will also serve to provide additional information on cadavers, including on whether they had been relocated or drugs have been used, the officials said.

“Currently, the lab has two people and is able to handle some 500 cases per year, but the police is planning to expand the workforce at least to four,” he said.