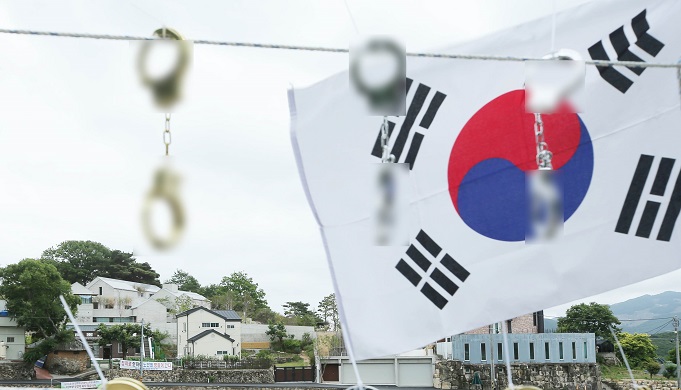 SEOUL, June 10 (Korea Bizwire) — Police said Friday they will guarantee rallies and demonstrations in front of former President Moon Jae-in’s residence in the southeastern city of Yangsan but illegal activities will be dealt with sternly.

The National Police Agency said in a statement that strict actions will be taken in accordance with the law and principles against illegalities by anti-Moon demonstrators, such as noises exceeding the permissible level and infringements on the peaceful private lives of local residents.

It is the first time the police have expressed an official position on the issue, as the Moon family has reportedly suffered from loud noises and abusive language from demonstrators since arriving at their new home in Pyeongsan village of Yangsan, 420 kilometers southeast of Seoul, on May 11 after his retirement.

Pyeongsan is a small rural village with just 54 households.

Moon and his wife, Kim Jung-sook, even lodged a complaint against some demonstrators on May 31, while more than 50 village residents have reportedly submitted complaints to the police over noise from demonstrators.

The statement appears to have been issued as police have been criticized by Moon’s supporters for not aggressively responding to the controversial anti-Moon rallies.

The statement said police have so far imposed restrictions and bans on rallies by anti-Moon protesters in the village and launched investigations into their alleged illegal activities on the basis of petitions from village residents and the Assembly and Demonstration Act.

Police last week slapped their first ban on two rallies planned by an organization of victims of abnormal reactions to COVID-19 vaccines and their families in front of Moon’s home.

A number of lawmakers from the main opposition Democratic Party have proposed amendments to the Assembly and Demonstration Act to prohibit rallies and demonstrations in the vicinity of former presidents’ homes.