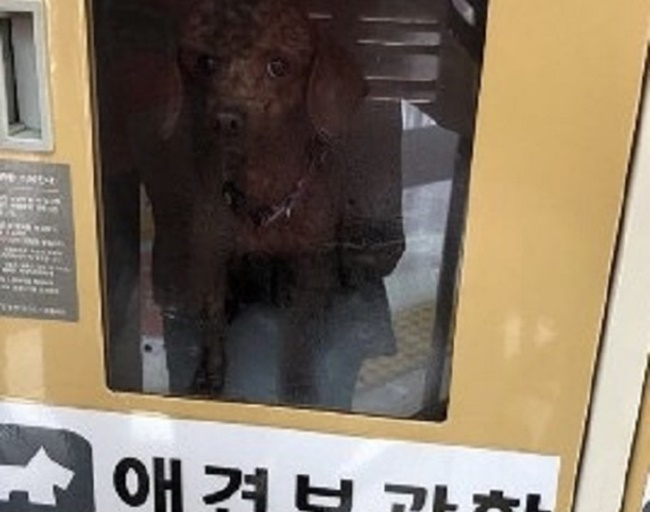 A shopper whose name is being withheld left a dog in a pet locker on Sunday at a Lotte Mart store in Jeonju, according to police and Lotte Mart officials. (Image: Yonhap)

SEOUL, April 18 (Korea Bizwire) — A poodle that was kept in a coin locker for nine hours has sparked a debate over pet coin lockers at major supermarket chains in South Korea.

A shopper whose name is being withheld left a dog in a pet locker on Sunday at a Lotte Mart store in Jeonju, according to police and Lotte Mart officials.

The dog had been kept inside a tiny locker for over four hours when first found by a passerby later in the afternoon, who took to the internet to report a possible case of animal abuse.

In the picture uploaded on social media, a brown poodle is visible inside a locker with the glass wall clouded over, which many saw as resulting from heavy breathing.

“I was shopping with my dog inside the locker when I received an emergency call from work. I had to travel to Seocheon County in South Chungcheong Province,” the dog owner later said.

The incident has sparked a heated debate over pet coin lockers on the internet, as critics say they represent a form of animal abuse while supporters call them an essential amenity of supermarkets.

“Neglecting dogs in a confined space is clearly animal abuse. But we do acknowledge the need for pet lockers given the rapidly growing pet population,” animal rights organization CARE said.

“However, the lockers need to be bigger, and the maximum hours of usage should be limited. During the winter and the summer, air conditioning and heating should also be provided to improve the environment,” the group added.

Since the incident took place, the Lotte Mart store is now collecting personal information about dog owners such as their name and contact numbers before permitting shoppers to leave their pet in the lockers.

“It’s an awkward situation to be in when the facility was to provide convenience for dog owners. We are considering the idea of collecting personal information about dog owners at other branches as well as expanding the size of the lockers,” a Lotte Mart official said.