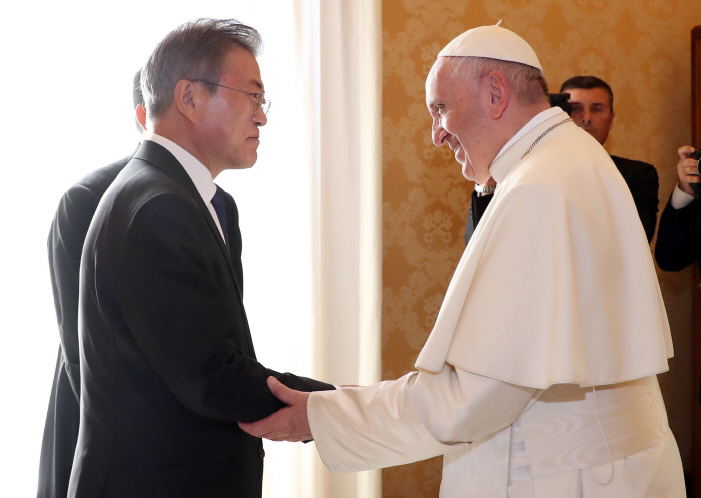 South Korean President Moon Jae-in (L) holds hands with Pope Francis while paying a courtesy call on the pontiff in the Vatican on Oct. 18, 2018. (image: Yonhap)

VATICAN CITY, Oct. 22 (Korea Bizwire) — Pope Francis has given the impression that he has a strong willingness to visit North Korea, a senior South Korean bishop said Monday.

Lazarus You Heung-sik, who heads the Daejeon diocese, spoke in an interview with Yonhap News Agency at Casa Santa Marta in the Vatican, three days after the pope indicated during a meeting with South Korean President Moon Jae-in that he may visit the North.

In his meeting with the pope, Moon relayed a verbal invitation from North Korean leader Kim Jong-un to visit Pyongyang.

“As I was near Pope Francis, he impressed me as having a strong intention to make the visit, and it needs to be well-prepared to make it materialize,” said You, who is widely known as the most knowledgeable figure on Vatican affairs in the South Korean Catholic Church.

Since Sept. 28, You has been staying in the papal residence to take part in a meeting of bishops from around the world, known as a synod.

He was involved in the preparation of a special mass for peace on the Korean Peninsula at the Vatican, presided over by its top diplomat, Pietro Parolin, on Wednesday, as well as the Moon-Pope Francis meeting.

You, who also serves as chief of the committee for justice and peace at the Catholic Bishops’ Conference of Korea, expected that the preparation for the papal visit will come only after an invitation arrives from the North.

In order to realize the pope’s visit to the North, it is necessary to make a detailed plan and to have a thorough consultation among related countries, he said, adding, “It would be not right for the pope to make the visit without conditions. Working-level discussions should be had before the pope goes to any region.”

“In the case of North Korea, I believe we have no bishops (to discuss with), which means we need to have a lot more time and patience to have consultations between the Vatican and Pyongyang.”

Asked about the reported expectation the pope will make an Asia trip in May next yearthat will take him to China, Japan and North Korea, You called it “groundless” and said it is not appropriate to discuss the timing of the pope’s visit to the North for the moment.

“Doing mere guesswork on the visit’s timing will not only not help make the visit materialize but also pose a burden the Vatican and the pope,” he said, calling for necessary steps and preparations to be thoroughly made.

The pope’s visit to the North is surely an event so epoch-making that it will change the history of the world and North Korea, but its eventual materialization will come only through small things that should be done first, You said.

“Should we fail to make the opportunity come true, we would commit a sin in the face of history. As such, we need to make the preparation piecemeal,” he said.