“POSCO will help India make the leap towards becoming a core base in the automobile and components industry, and POSCO will play a role in the achievement of the ‘Made in India’ vision, which contains the will of the Indian government to invigorate the manufacturing sector.  By going beyond being a simple steel supplier, POSCO will contribute to the production of leading goods in demand by consumers, and in tune with their tastes.” 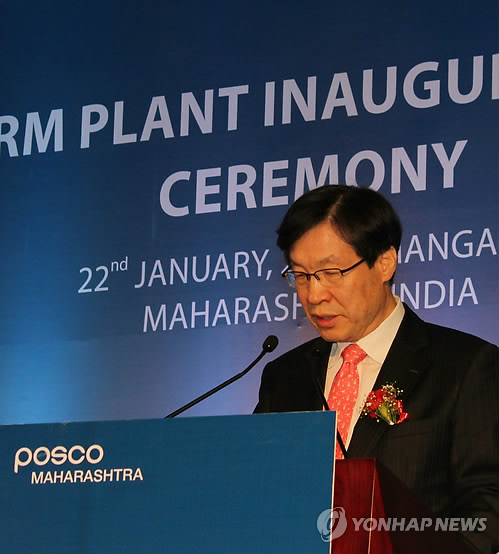 Kwon has also been strengthening relationships by meeting steel industry tycoons in India, including Chairman Sajjan Jindal of JSW, an influential steel enterprise in India, and Chairman Chandra Varma of SAIL. (image courtesy of Yonhap)

SEOUL, Jan. 25 (Korea Bizwire) – POSCO has completed construction of a cold-rolled steel sheet factory in India, which will fortify its position within the global market for steel sheets used in automobile manufacturing.  Chairman Kwon, who left Korea on January 16 and has been visiting India, attended the ribbon-cutting ceremony for the POSCO Maharashtra cold-rolling factory, which was convened at the factory site within the Vile-Bhagad MIDC Industrial Area in Maharashtra in India on January 22.

At the building dedication ceremony, over 20 government figures, including Narendra Tomar, the Union Minister of Mines, Steel, and Labour & Employment from the central government of India, and Subhash Desai, the Minister for Industries of Maharashtra attended. Also present were representatives from major global automobile makers, including Volkswagen, Nissan, Tata and Toyota.

Construction of the factory began in 2011 with a US$709 million investment, and it entered commercial production in June last year.  The annual production capacity is 1.8 million tons, which makes it POSCO’s largest overseas cold-rolling steel factory.  In 2012, POSCO completed construction of a hot dip galvanized steel sheets factory for automobiles and home appliances with a scale of production of 450,000 tons per year in Maharashtra, and it has been operating the factory since then.

In addition, plants in Delhi, Pune, and Chennai that process the steel sheets to match customer requests have started operations. In March of this year, the construction of a 110,000 ton per year steel processing plant will begin in Gujarat.  As such, POSCO has been making significant investments in India recently.

Meanwhile, on January 20, before the building dedication ceremony, Chairman Kwon met Prime Minister Modi of India.  He requested cooperation to resolve the long-cherished businesses of POSCO, including the construction of an integrated steel mill in Odisha and other similar projects.  Kwon has also been strengthening relationships by meeting steel industry tycoons in India, including Chairman Sajjan Jindal of JSW, an influential steel enterprise in India, and Chairman Chandra Varma of SAIL.