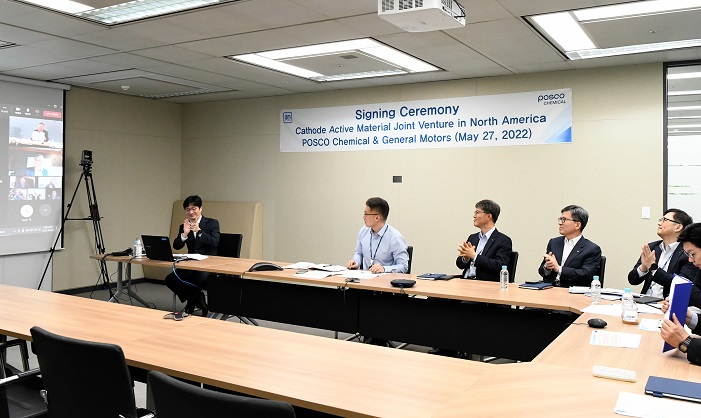 SEOUL, May 27 (Korea Bizwire) — South Korean chemical maker POSCO Chemical Co. said Friday it is building a US$327 million cathode plant with General Motors Co. in the Canadian city of Quebec to supply the key electric vehicle battery component to the U.S. automaker.

The two have signed a final agreement on setting up their joint venture, Ultium CAM, and building a cathode production facility in Becancour in southern Quebec by 2024, POSCO Chemical said in a release.

The Quebec plant will produce about 30,000 tons of high-nickel cathodes annually, enough to produce 220,000 EVs, and aim to gradually expand its production. The construction will start in August.

A cathode is one source of lithium in a lithium-ion battery and is also a key component of EV batteries. It accounts for about 40 percent of a battery’s production cost.

The joint venture also comes with a cathode supply contract for POSCO Chemical over eight years starting 2025, valued at least 8 trillion won (US$6.73 billion), it said.

POSCO Chemical, a unit of POSCO Group whose flagship is steel titan POSCO, and GM announced in December a plan to set up a joint venture in North America.

POSCO Chemical’s JV with GM is part of POSCO Group’s push to boost its EV business in recent years as part of a diversification strategy.

POSCO Chemical said it plans to further expand its overseas foothold into other markets, like Europe and Indonesia.