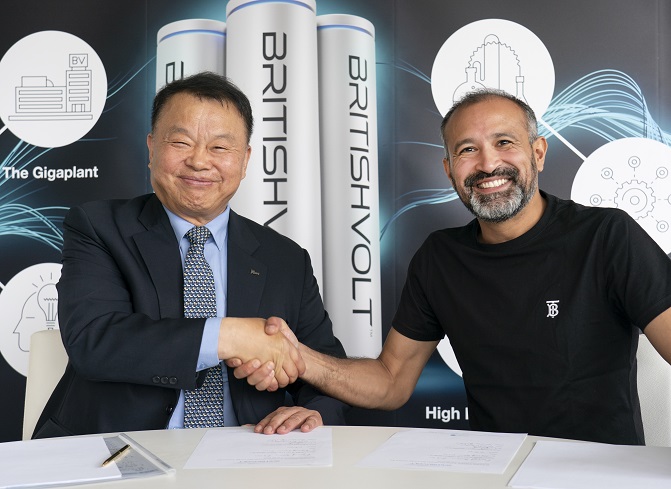 POSCO Chemical CEO Min Kyung-zoon (L) shakes hands with Orral Nadjari, CEO and founder of Britishvolt, at a recent signing event for the agreement on cooperation for battery development and supply, in Sussex, Britain, in this photo provided by POSCO Chemical on June 30, 2022.

SEOUL, June 30 (Korea Bizwire) — POSCO Chemical Co., a major South Korean chemical company, said Thursday it has agreed to cooperate with a British battery startup on the development and supply of electric vehicle battery components in a bid to tap deeper into the European EV market.

POSCO Chemical and Britishvolt Ltd., a West Midlands-headquartered battery company, will also work to establish a stable supply chain, including securing the raw materials for battery components and ensuring local production in Europe.

Britishvolt aims to have an annual production capacity of 100 gigawatt hours from its facilities under construction in Northumberland in England and the Canadian city of Quebec. It counts British carmakers, like Aston Martin and Lotus, as its clients.

POSCO Chemical is building a cathode production facility in southern Quebec in the joint venture with U.S. General Motors, with the operation to start in 2024 to produce about 30,000 tons of high-nickel cathodes a year, enough to produce 220,000 EVs.