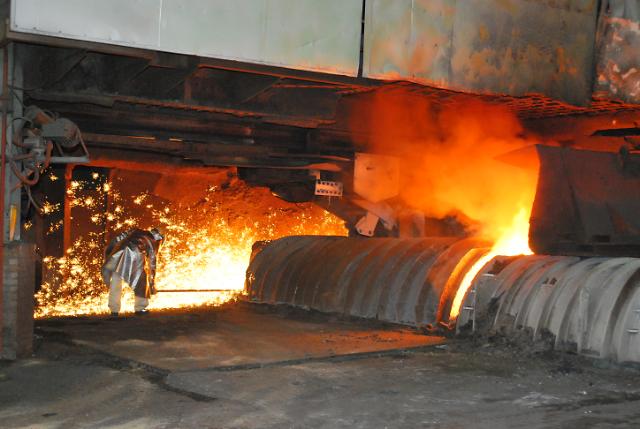 This file photo provided by POSCO shows a worker at the No. 1 blast furnace in the steelmaker’s integrated steel mill in Pohang, 370 kilometers south of Seoul.

The company on Thursday inaugurated the Center for Low-Carbon Chemical Process (LCP) in collaboration with a group of industry, academic and research organizations including LG Chem Ltd. and Lotte Chemical Corp.

The LCP plans to invest a total of 25.2 billion won (US$17.8 million) by the year 2025 to carry out research on the manufacturing technology of low-carbon olefin, a synthetic fiber, that can reduce the emissions of CO2 by about 15 percent compared to existing technology.

POSCO plans to synthesize methanol using the CO2 extracted from by-product gases generated from furnaces. By cracking it simultaneously with naphtha, an integrated process for olefin production will be developed.

With the reduction in the use of naphtha compared to existing technologies, POSCO expects to be able to reduce emissions of CO2 throughout the entire steel-making process.

The empirical research will be implemented at POSCO’s Gwangyang steel plant starting next year.