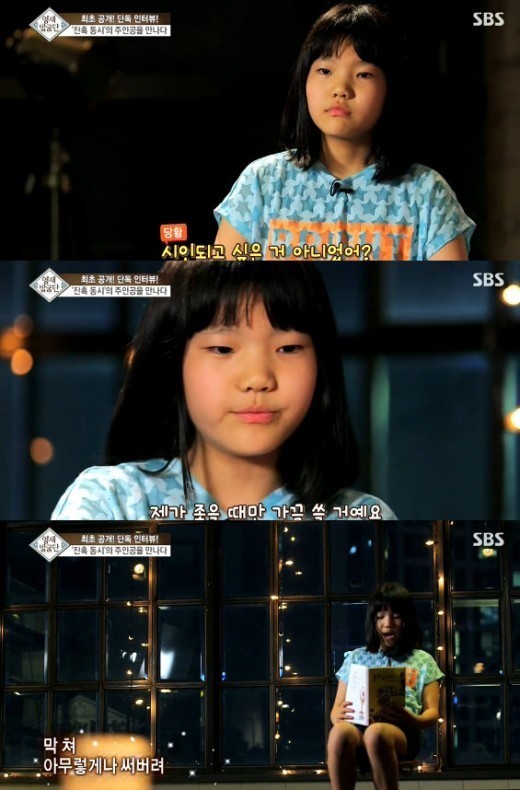 In the poem are shocking phrases such as “When I don’t want to go to the institute / I chew on my mother / eat her boiled and eat her baked / scoop her eyes out / pull out all her teeth”. (image courtesy of SBS)

Seoul, July 16 (Korea Bizwire) – Lee Soon-young, a 10-year-old girl who is courting controversy due to a piece of writing that has been dubbed’brutal children’s poem’, wished that her mother would only focus on her.

Soon-young appeared with her mother, poet Kim Bada, on ‘Seeking for Prodigies’, a show aired on SBS TV. The thoughts and life of the little girl after the ‘brutal children’s poem’ controversy wererevealed.

When asked how she has been after the release of her poetry book, she answered she has been well. She said, “I have a poem titled ‘Don’t want to go to the (English) institute’, and people call it the ‘brutal children’s poem’. Some say I’m a psychopath – but a poem is just a poem”.

She spoke about the reason she wrote the poem. “One day I really didn’t want to go to my private institute. I didn’t sleep much and was really tired. Even so, I had to go study English. It was all because I watched TV until late at night and woke up early in the morning.”

In the poem are shocking phrases such as “When I don’t want to go to the institute / I chew on my mother / eat her boiled and eat her baked / scoop her eyes out / pull out all her teeth”.

After the controversy grew, the publishing house recalled all the books and discarded them in May.

The SBS program showed Soon-young’s older brother, who has talent in many areas including piano playing and getting good grades at school, and her mother, who is devoted to supporting her eldest son.

When asked what kind of mother she wanted, Soon-young replied, “I want my mother to only take care of me. I want her to only think about me”.

Her mother, Kim Bada, confesses, “When I saw the poem Soon-young wrote, I thought she might want to receive more attention from me”.

The program also highlights Soon-young’s talents as a poet, which were buried under the controversy. But Soon-young, wanting to be a judge when she grows up says, “I’m only going to write poems when I want to. I just enjoy writing poems”.
By Lina Jang (linajang@koreabizwire.com)