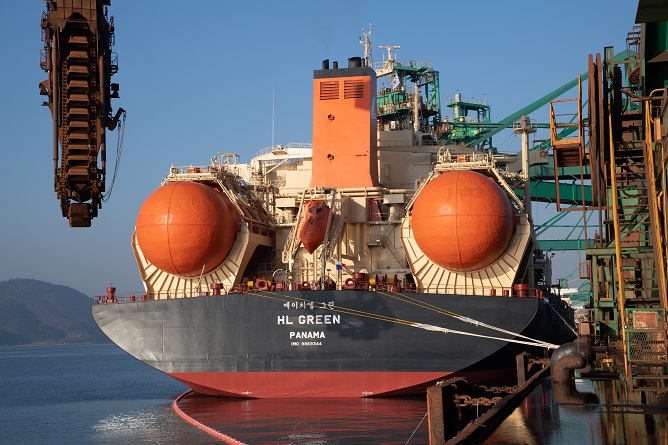 POSCO’s eco-friendly bulk carrier HL Green arrived at the terminal of its steel mill in Gwangyang, 420 kilometers southwest of Seoul, after departing from Mokpo in December 2020 and taking on 180,000 tons of iron ore in Australia.

The HL Green is the world’s largest LNG-powered bulk carrier at a length of 292 meters, a width of 45 meters and a depth of 24.8 meters.

POSCO explained that this was the first time in the world that a large-sized LNG-powered bulk carrier had successfully completed an overseas trip.

The operation of LNG-fueled bulk carriers can contribute to reducing emissions of sulfur oxides and nitrogen oxides by 99 percent and 85 percent, respectively, compared to the operation of the ships that run on conventional bunker oil.

POSCO reached an agreement with H-Line Shipping to replace two bulk carriers with LNG-powered ones in December 2018 before the International Maritime Organization (IMO) strengthened its regulations.

Under this agreement, they completed the construction of the LNG-powered carriers in December of 2020.