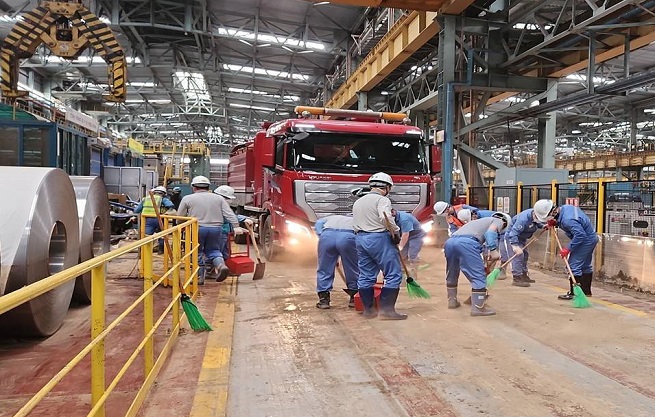 Workers remove mud at POSCO in Pohang, 374 kilometers southeast of Seoul, on Sept. 27, 2022, after many parts of the steel mill were flooded by torrential rains by the super strong Typhoon Hinnamnor, in this photo provided by the steelmaker.

SEOUL, Nov. 14 (Korea Bizwire) — South Korea’s top steelmaker POSCO is expected to fully normalize its facilities damaged by a September typhoon during the first quarter of next year, the industry ministry said Monday.

The ministry’s estimate for the full recovery of the typhoon-hit facilities contrasts with POSCO’s own projection that they will be restored by the end of the year.

But the ministry and the steelmaker stressed that no major supply glitch is expected stemming from the typhoon damage.

The assessment was made by a 10-member team set up by the ministry involving government officials and experts after the super strong Typhoon Hinnamnor pounded POSCO’s steel mill in Pohang, about 370 kilometers southeast of Seoul, and had led to the suspension of its major facilities.

All of the steelmaker’s three blast furnaces and six out of 18 steel-processing facilities had been put back to normal operations after being suspended, but the remainder have remained closed.

According to the assessment, POSCO suffered 2.4 trillion won (US$1.82 billion) in lost revenue, which accounted for around 2.7 percent of its annual revenue, and its suppliers saw their lost revenue come to a combined 250 billion won.

The company is expected to normalize “nine product factories within this year, and two other cold rolling and plating factories by the first quarter of next year,” with the time frame for the normalization of one remaining facility yet to be fixed.

Despite damage, chances for any major supply glitch are quite low this year, as the company has been working to increase production in its blast furnaces in the southwestern city of Gwangyang and importing steel products from overseas, the probe team said.

An economic downturn has also led to the fall in demand and the company’s sufficient product stockpiles, it added.

The investigation team called on POSCO to improve the drainage system of the factory and independent power generation facilities, and to review the possible construction of structures to prevent overflow of the adjacent stream.

“POSCO is also advised to come up with ‘business continuity planning,’ rather than the existing usual anti-disaster manual, to devise comprehensive measures to better respond to any disasters and to protect the market,” the team said in their report.

The final investigation report by the team will be available next month, according to the ministry.

The typhoon killed more than 10 people, and left severe flooding and damage.