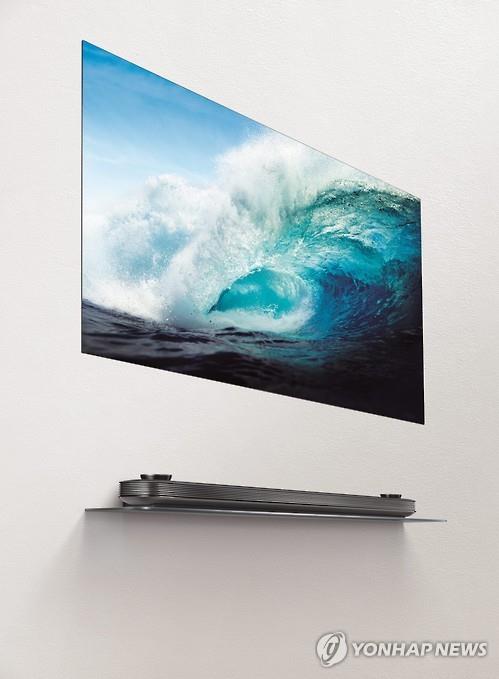 According to LG, its Home Entertainment (HE) division, which focuses on TVs, posted a record-high operating profit of 382.2 billion won (US$338 million) in the January-March period. Its operating profit ratio reached 8.8 percent, the highest ever for the first three months of any year.

Samsung Consumer Electronics (CE) division, which includes not only TVs but refrigerators and washing machines, listed an operating profit of 380 billion won.

They pointed out that LG held the lead in premium sets sold that fetched top prices.

In this field, LG, which controlled 40.8 percent of the worldwide market last year, said 9.5 percent of the company’s sales came from selling state-of-the-art sets in the first quarter. This marks a 3 percentage-point advance from 6.5 percent reached a year earlier.

In contrast, Samsung’s top-tier TVs accounted for 2.7 percent of its total earnings, down sharply from 8.6 percent tallied a year earlier. The company did not do very well in the near premium sector vis-a-vis LG.

Related to the results, market watchers said that LG has built a solid consumer base for its cutting-edge organic light-emitting diode (OLED) TVs that are extremely thin and offer excellent and sharp pictures.

Samsung on the other hand has invested heavily in its quantum dot light-emitting diodes (QLED). The company said it has developed an advanced metal quantum dot display that it claims has superior characteristics compared with OLED.

Reflecting its commitment, Samsung said it has released its latest QLED TV in the fast emerging Indian market.

The tech giant said the unveiling took place in New Delhi on Tuesday (India time) with Samsung showcasing its “The Frame” TV at the same event.

Samsung controls 30 percent of the subcontinent’s flat-screen market, with its ultra high-definition models accounting for half of the sales among premium TVs.