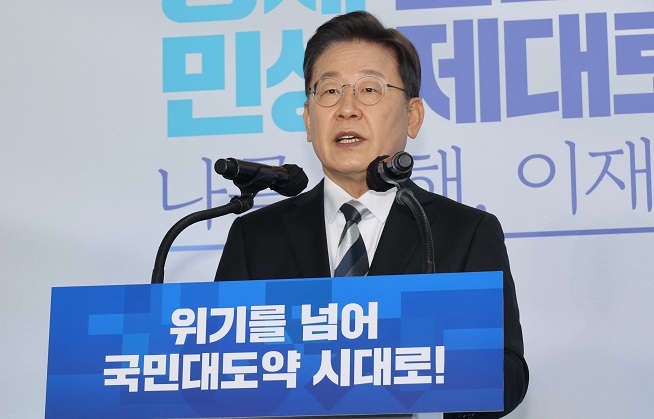 Lee Jae-myung, the presidential candidate of the ruling Democratic Party, speaks during a press conference to mark the new year at a plant of the Kia Corp. carmaker in Gwangmyeong, near Seoul, on Jan. 4, 2022. (Pool photo) (Yonhap)

SEOUL, Jan. 5 (Korea Bizwire) — Online communities related to hair loss were full of excitement amid news that Democratic Party presidential candidate Lee Jae-myung is reviewing the idea of extending coverage under the national health insurance plan to hair loss medication as one of his presidential pledges.

An official from the party’s campaign committee said that the idea has been reviewed extensively and now is at the final stage of review to make sure that there will not be any issues if the idea is brought to fruition.

The extension of health insurance coverage to include hair loss drugs drew significant attention when it was originally included in the pledges proposed by the party’s campaign committee. With Lee supportive of the pledge, it is more likely to actually be implemented.

At present, natural or hereditary hair loss and hair loss treatments for the improvement of physical appearance are not covered under the national health insurance program.

Against this backdrop, online communities of bald people showed explosive responses to the news that the ruling party’s presidential candidate is considering subsidizing the cost of hair loss medicines as one of the presidential pledges.

In the few days after the presidential candidate mentioned the hair loss drug pledge, as many as 80 posts that can be found by searching for the words ‘hair loss drug, Lee Jae-myung’ were uploaded on the domestic online community DC Inside.

Critics say that extending health insurance coverage to hair loss treatment is a populist policy. Others, however, claim that these drugs should be covered, given that they cost around 70,000 won (US$58.46) per month.