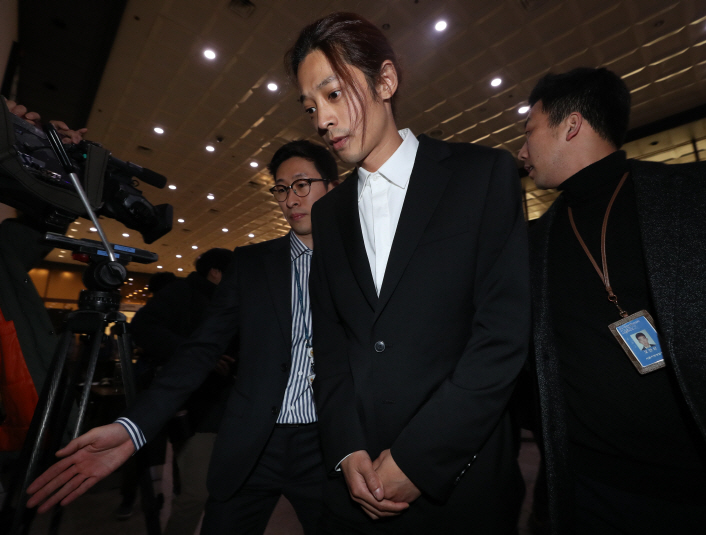 Victims, once known to the public, may be subject to retribution or secondary crimes. Also, those who were falsely referred to as “victims” may also be subject to physical and psychological suffering.

As of Thursday, a list of the recommended keywords when typing in the world ‘Jung Joon-young’ on Naver’s search bar includes the names of female celebrities.

It shows that many netizens are searching the names online to confirm if these female celebrities were indeed the victims of Jung’s illegal sex videos.

Many female celebrities who appeared on “the list” vowed to take action against those responsible for “creating and spreading malicious rumors.”

One local broadcasting company stirred controversy after posting a news article that hinted at the possible victims. The post has been removed.

“Revealing information about the victims or spreading illegal videos online may lead to secondary offenses that may be far more severe than primary ones,” said Lee Myung-sook, a lawyer who heads the Korean Center for Women Children’s Rights.

“The scope of a primary offense is usually limited to two people (aggressor and victim), but once the case goes online, it may cause irreparable damage to the victims.”

“It is important to strictly punish illegal acts of distributing videos, but it would still fall short of compensating for secondary damages,” she added.

“The key to the problem lies in how the media and the public addresses the issue.”

South Korean netizens shared banners on social networks asking others to stop secondary offenses. One of the banners was designed by Aha Sexuality Education and Counseling Center for Youth.

“We were shocked by how people were sharing illegal videos online,” said the center. “The media, too, is responsible for writing posts that alluded to possible victims.”

“What we have to be asking now is what amounts to violence, not who are the victims,” the center added. “That is why we do not wish to know the victims of sexual violence.”