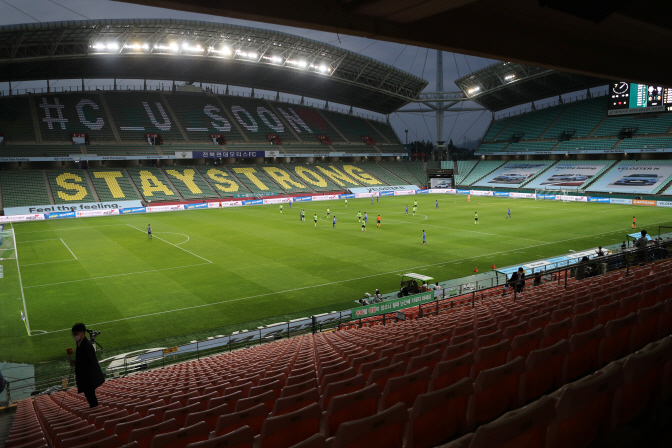 The 2020 K League 1 season opener between Jeonbuk Hyundai Motors and Suwon Samsung Bluewings is under way at Jeonju World Cup Stadium in Jeonju, 240 kilometers south of Seoul, on May 8, 2020. (Yonhap)

JEONJU, May 8 (Korea Bizwire) — It’s been a long time coming, but professional football is finally here in South Korea.

The season was slated to begin on Feb. 29 but was pushed back indefinitely five days prior to its start due to the coronavirus outbreak.

Then with the number of new cases steadily falling last month, the league settled on the second Friday of May to begin its new season.

Because of the delayed start, the season has been reduced from 38 matches to 27.

The early part of the season will be played without fans due to lingering COVID-19 infection concerns. 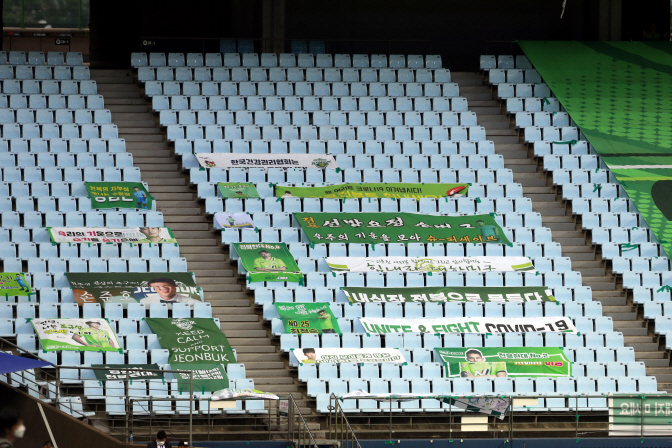 Banners with messages for Jeonbuk Hyundai Motors players are draped over empty seats at Jeonju World Cup Stadium in Jeonju, 240 kilometers south of Seoul, during the 2020 K League 1 season opener between Jeonbuk and Suwon Samsung Bluewings on May 8, 2020. (Yonhap)

With no other football league of this caliber in play anywhere in the world, the K League has been a hot commodity among broadcasters starving for live sports.

About two hours before Friday’s kickoff, the K League said it had sold rights to televise games in 36 countries. The British national broadcaster BBC was among the latest stations to purchase K League rights.

Strict quarantine guidelines were in place. Players, all of whom had already tested negative in recent leaguewide testing, had to have their temperatures checked before entering the stadium.

Coaches and substitutes on both benches had to keep their masks on.

In the absence of fans, Jeonbuk tried to recapture at least some match-like atmosphere by piping in recorded sounds of fans cheering.

Banners with fans’ messages for Jeonbuk players were hung on top of empty seats throughout the stadium.