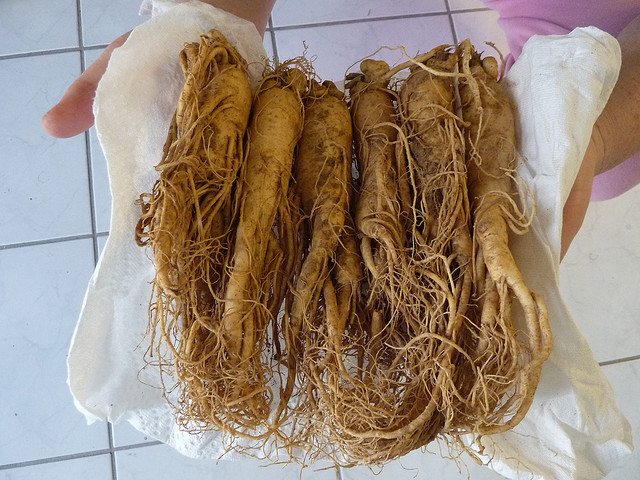 The biggest item in the total output was accounted for by Ginseng products, amounting to 586.9 billion won, 40 percent of the total. (image: Eugene K/flickr)

Products made from new ingredients not in the traditional health food list accounted for 16 percent, vitamin and mineral products represented 12 percent, probiotic items were equivalent to 5 percent and foods made from aloe amounted to 4 percent.

Among these health functional foods, the output of products with probiotics increased by 55 percent to 80.4 billion won last year, up from 51.8 billion won in 2012. The ministry said that the increasing popularity of the probiotics products came from people’s increasing awareness on the importance of intestine health.

In terms of products made from milk thistle, the output has rapidly increased to 30.8 billion won last year, up from 13.5 billion won in 2012, as the patents for the material expired.

When it comes to functional effects of the foods, products for the immune system was most popular, equivalent to 25 percent, followed by items for blood circulation (22%), antioxidants (21%), dietary supplements (7%) and foods for intestine health (5%).

Among imported functional foods for health, vitamin and mineral products accounted for 43 percent, ranking No. 1, and 68 percent of imported health products came from the U.S.

As of the end of the previous year, the number of functional health food manufacturers and sellers was 449 and 92,611 respectively, up 3.2 percent and 10.3 percent, respectively, compared with the same period last year.

“The popularity of functional health food seems to be steadily increasing as people live longer and lead more affluent lives,” a ministry official said. “We will improve the safety and function of those products by building a system to test potential functionalities and technically supporting a new development of ingredients,” he added.