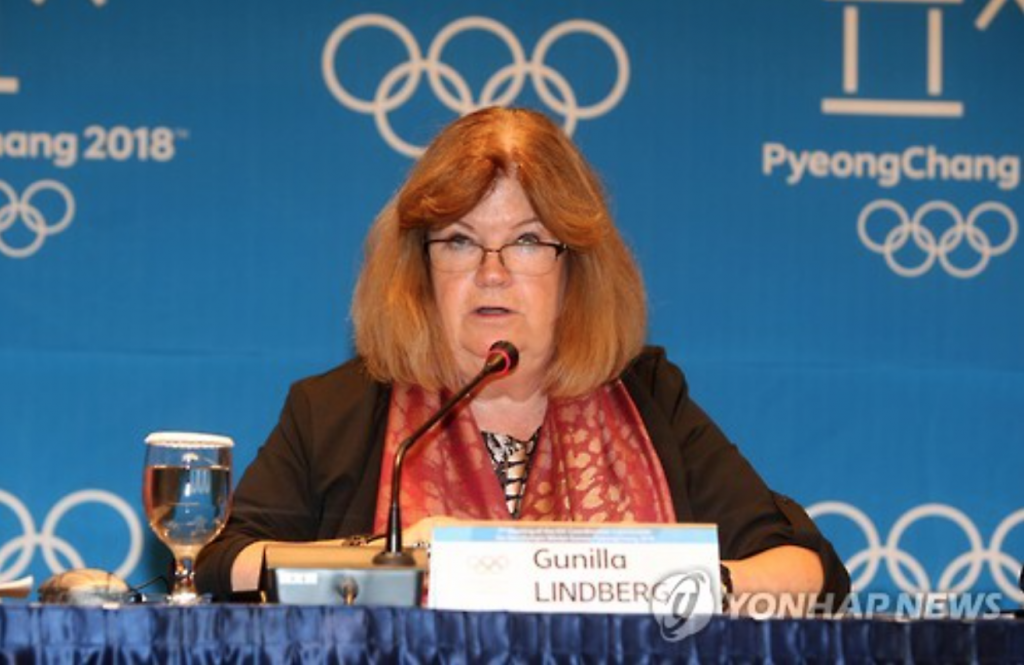 The IOC’s Coordination Commission on PyeongChang, headed by Gunilla Lindberg, wrapped up its seventh visit Friday. Having held meetings with the officials of the PyeongChang Organizing Committee for the 2018 Olympic & Paralympic Winter Games (POCOG) and toured venue construction sites, Lindberg said she and her team “were very pleased” with the progress they saw.

“There’s no doubt the venues will be ready for upcoming test events,” Lindberg said at a press conference held in PyeongChang, some 180 kilometers east of Seoul. She was referring to 26 Olympic test events in 20 sports scheduled between November and April, including snowboarding, short track speed skating, luge, figure skating and hockey.

“The test events will be a great opportunity to raise awareness and generate excitement for PyeongChang 2018 and to showcase the level of preparation,” Lindberg added. “A successful Olympics will require a fast transition from planning to operation. We will engage more closely with key stakeholders.”

The most crucial challenge, however, will be letting the world in on the South Korean host city, Lindberg said.

“The biggest challenge at the moment is how to promote the Games over the world, because this is a small place,” she said. “It’s not Rio de Janeiro and it’s not London (the hosts of the past two Summer Games). We have to take action as soon as possible. We’ll have a series of test events, and the athletes will be coming. We’ll have major TV coverage and people will be aware of the Games in PyeongChang. The PyeongChang Games will be an opportunity for people from abroad to visit Korea and see winter sports here.”

“Of the numerous things that we have done so far and still have left to do, the most important task is to encourage the people to support us and to participate in the Olympics,” Lee said. “We have honorary ambassadors who are working to promote the PyeongChang Games domestically and internationally.”

To help maximize the promotional effects, Lee said the POCOG has delayed the start of the ticket sales from this month to February next year. Lee said it will be timed to the one-year countdown to the Feb. 9-25 Games.

“We felt the start of the one-year countdown will help us get the most out of our marketing strategies,” Lee said, adding that the POCOG took cues from Sochi’s move prior to the 2014 Winter Games. “And we’ll focus on preparing for the test events and raising people’s interest in winter sports in the upcoming season.”

An official with the POCOG told Yonhap News Agency that though PyeongChang is “fully ready technically to start ticket sales now,” the IOC proposed the change, as both sides agreed that it will be ultimately beneficial for the organizers to push back the date.

“It will give us more opportunity to engage the public about winter sports and gather more momentum into the ticket sales launch,” the official said on the condition of anonymity. “It will also let us work with our partners to improve and build up more hospitality programs and other offers linked to the ticket sales.”

Lindberg said the venue legacy plans — ideas on how to make the best use of venues after the Olympics — were also on the agenda and it was time to finalize the details.

Lee said he was aware of the emphasis that the IOC places on venue legacy, and that the POCOG has pledged not to let Olympic venues go to waste after the Games.

“This is something we’ll continue to discuss even after the Olympic Games are over,” he said. “We’ve determined after-use plans for 10 of our 12 venues. We’ll finalize plans for the two remaining facilities soon.”

Lee said one idea currently being discussed is to bring athletes for the 2022 Beijing Winter Games to PyeongChang for training. With the next two Olympics to be held in the neighboring countries, sports ministers and chief Olympic organizers of the two host nations have already discussed strengthening their cooperation.

Despite these and other issues, Lindberg said she’s never lost faith in PyeongChang’s ability to stage a successful Olympics.

“PyeongChang 2018 is entering its last stage of preparations, and there’s always a lot of work to do at this stage of Games preparations,” she said. “My colleagues and I are more confident than ever before in PyeongChang. We’re absolutely convinced that the delivery of the Games will be on time and it will be a great success.”