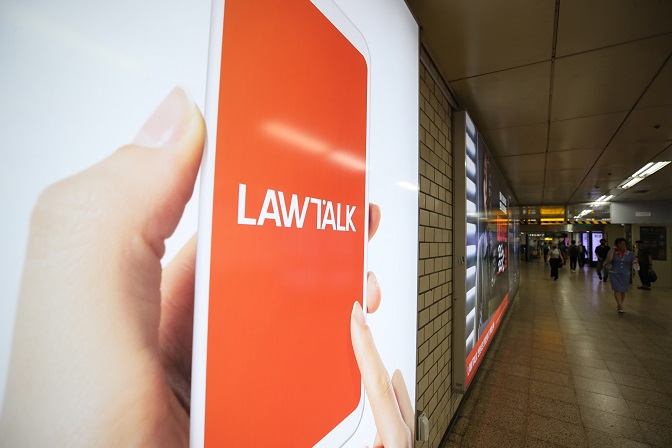 In this file photo, people pass by a billboard advertising LawTalk, an online service that connects clients and lawyers, in Seoul on Aug. 4, 2021. (Yonhap)

The prosecutors’ office deemed it unreasonable to believe that LawTalk’s method of operation, in which it does not receive any commissions from member attorneys other than advertisement, violates the Attorney-at-law Act which bans acts of introducing or recommending a designated lawyer.

On accusations that the ‘AI-based penalty estimation service’ was run despite it not being an attorney, the prosecutor’s office dismissed the accusations since the service is being offered for free.

The prosecutor’s office also dismissed the accusation that the slogan used in LawTalk’s advertisement that claims to ‘assess a case in 15 minutes by an attorney’ provides the false information that LawTalk offers legal services itself.

Another accusation that LawTalk violated the Privacy Act for illicitly collecting court cases that include personal information was also dismissed by the prosecutor’s office since LawTalk collected them through the country’s official court website, leaving no evidence of illegal tampering with its servers.

The case went viral after a bar association sued Law & Company at the prosecutor’s office in November 2020.