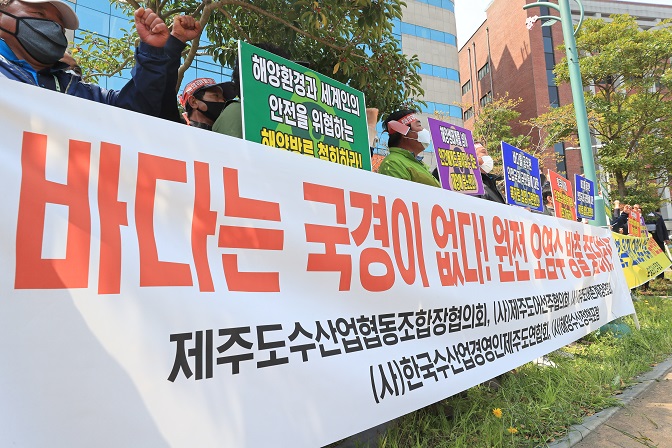 Members of fisheries organizations hold a protest rally against Japan’s decision to discharge contaminated water into the sea in front of the Japanese Consulate on the southern South Korean resort island of Jeju on April 16, 2021. (Yonhap)

SEOUL, April 16 (Korea Bizwire) — South Koreans’ protests against Japan’s bid to dump contaminated water from the destroyed Fukushima nuclear plant into the sea are spreading across many sectors of society, with a number of protest rallies held in Seoul and elsewhere on Friday.

A civic group that comprises merchants from the Noryangjin Fisheries Wholesale Market held a news conference in front of the Japanese Embassy in downtown Seoul condemning the Japanese government for unilaterally deciding to discharge radioactive water without any consultations with its neighboring countries.

The group warned that the planned release of contaminated water will certainly hurt everyone in the fisheries industry.

Seoul People’s Action, an organization jointly created by 25 labor and progressive civic groups in the capital, also held a press conference in front of the Japanese Embassy to warn of a global disaster from Japanese wastewater and denounce the United States for taking sides with Japan.

“Why should the whole earth suffer a disaster due to the Japanese government’s economical disposal of radioactive contaminants?” the organization asked.

“The (Fukushima water discharge) decision was made only three days before the U.S.-Japan summit. Therefore, it can be speculated that there was an advance discussion between the two sides and the U.S. is siding with Japan for its own interests,” it argued. 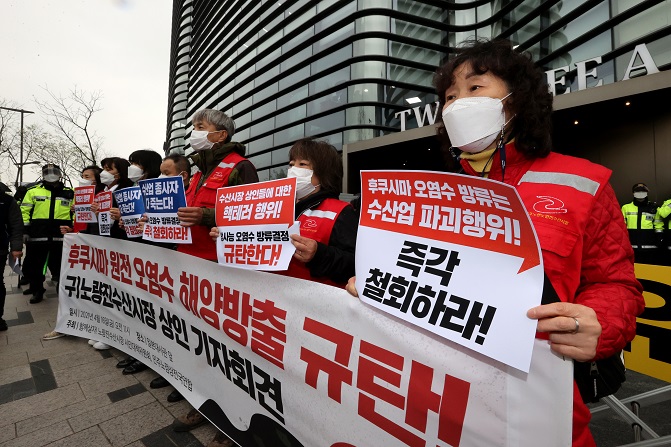 Fisheries market merchants and civic activists condemn Japan’s decision to release radioactive water into the sea during a protest rally in front of the Japanese Embassy in Seoul on April 16, 2021. (Yonhap)

The Korea Freedom Federation, a conservative public organization, joined the criticism of Japan by holding an online protest rally of heads of its regional chapters from its headquarters in Seoul.

The federation warned that Japan’s discharge of contaminated water will irreversibly pollute the ocean and put fatal burdens on future generations.

It then urged Tokyo to immediately apologize and retract its decision to release radioactive water.

Tokyo announced on Tuesday that it plans to start releasing massive amounts of radioactive water, which has been stored in tanks at the wrecked Fukushima nuclear plant, in two years.

Since then, a growing number of civic groups and local government heads in South Korea have held protest rallies or issued statements against the Japanese move.